Staff at King's College London are to take strike action over plans to cut academic jobs in the School of Medicine, School of Biomedical Sciences and the Institute of Psychiatry. 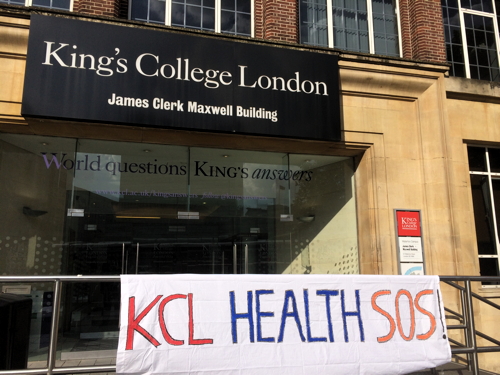 On Tuesday night staff and students held a protest outside the James Clerk Maxwell Building in Waterloo carrying 120 balloons to represent the number of academic staff whose jobs are under threat.

More than 4,000 people have signed a petition protesting against the cuts and the handling of the issue by KCL management.

The School of Medicine includes is split between Guy's Hospital, St Thomas' Hospital and King's College Hospital. The School of Biomedical Sciences also has a presence at the Waterloo campus.

On Wednesday the University and College Union announced that staff had overwhelmingly backed strike action in a ballot.

UCU regional official Barry Jones said: "Staff at King's have made it absolutely clear what they think of the plans to axe jobs to fund building projects. Sacking over 100 staff will do absolutely nothing for King's College's academic reputation.

"While strike action is always a last resort, King's College's cynical attempts to finalise these redundancies during the summer break left members with no option but to ballot for action now. We shall be meeting early next week to decide our next steps. Our door remains open to college managers to try and resolve this without disruption."

A spokeswoman for KCL said: "The external environment in which universities like King's College London operate has changed significantly in recent years.

"We have ambitious plans to enhance our position as a world-leading university and to meet these objectives we strive for academic excellence and strong performance across all areas, as well as effective management of our costs. In this climate we need a robust strategy to finance our future sustainably.

"All parts of the college are looking at how they can control costs, increase income and collectively raise performance.

"We understand that this is an unsettling time for staff and students potentially affected by the Health School proposals. We continue to listen to their concerns and will consider all their representations before any final decisions are made."