The 1,000th anniversary of the reputed destruction of London Bridge by St Olaf has been marked with a service of Choral Evensong at Southwark Cathedral. 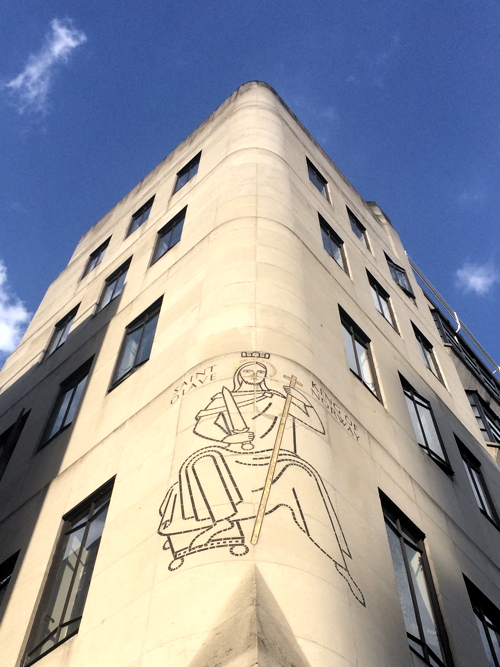 St Olaf (or Olave) is depicted on the side of St Olaf House, the office building which occupies the site of St Olave's Church

Tuesday was St Olaf's Day and members of the Norwegian Church Abroad gathered at Southwark Cathedral for a service of Choral Evensong which marked their 150th anniversary as well as 1,000 years since the 'rescue of London' by St Olaf.

The congregation was welcomed to the service by the Very Revd Andrew Nunn, Dean of Southwark, and Revd Torbjorn Holt, rector of the Norwegian Church in Rotherhithe.

The events of a millennium ago are slightly obscure, but Olaf's role in the defence of London has been passed down the centuries in poetry and folklore.

"The question of whether or not the alleged attack took place on London Bridge in 1014 cannot be proven in so far as it is not described in contemporary English documents, but as the existence of many of the events described in the Heimskringla compiled by Snorri can be corroborated by other sources, there is no reason to disbelieve his account of the attack on London Bridge," wrote Jan Ragnar Hagland and Bruce Watson in London Archaeologist magazine in 2005.

According to the story, Danish king Sweyn Forkbeard and Norwegian prince Olaf Haraldsson had been attacking England since 980.

In 1014 Olaf was converted to Christianity during a winter stay in Normandy, and was baptised in Rouen Cathedral.

Olaf vowed not to attack England again and that year he came to the aid of King Ethelred the Unready to help defend London against the Danes.

Olaf's men managed to attach ropes to the piers of London Bridge from boats in the Thames and pull the bridge down, thus defeating the Vikings and ending their occupation of the City.

Olaf went on to become King Olaf II of Norway in 1015 and was later canonised.

St Olave's Church, which stood at the southern end of London Bridge, was dedicated to him.

When St Olave's Church was demolished in the late 1920s, some of the proceeds of the sale were used to create Tanner Street Park and part of the church tower now stands in those gardens as a (disused) drinking fountain.

By coincidence Southwark Cathedral is twinned with Rouen Cathedral where Olaf was baptised and the 1,000th anniversary of that event will be marked later this year.