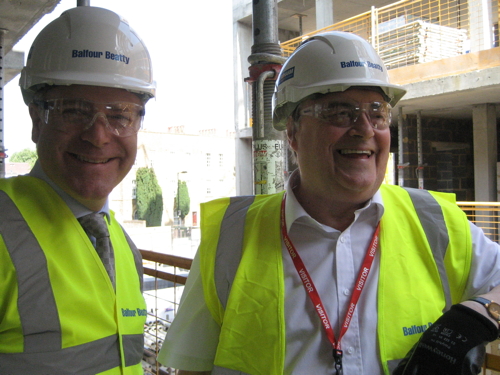 Work is under way on the Setchell Estate in Willow Walk on the construction of 21 homes for social rent as well as 54 units of short-stay accommodation.

The scheme has been part-funded by a payment of £5 million from the developers of the luxury Neo Bankside towers next to Tate Modern in lieu of the provision of affordable housing on that site.

The council intends to build 11,000 new council homes over the next few decades and is currently examining a range of funding options.

"We're just not building enough affordable housing generally so I'm really interested in seeing what is happening across the country, in the north and the south," said Lord Prescott.

"Thank goodness we're still building for ordinary people in Southwark, with the emphasis on quality and by the local authority – it's impressive and I'm pleased to see it."

Cllr Peter John, leader of Southwark Council, said: "I'm delighted to welcome the former deputy prime minister and to demonstrate that our plans for building thousands of new homes are not simply lip-service, they have become bricks and mortar.

"The first phase of our direct delivery programme is already well under way and we'll have much more to show as the months pass."

Speaking at last week's cabinet meeting Cllr Richard Livingstone, who holds the housing portfolio, insisted that a fair proportion of the new council homes would be built in the north of the borough and revealed that talks were under way with Leathermarket JMB about building further homes on their estates in Bermondsey beyond the sites already in the pipeline in Weston Street and Deverell Street.

"I note already that around 32 per cent of homes in phases one and two are in SE1 and certainly we are making a big commitment to the north of the borough as part of all this," said Cllr Livingstone.

"I know there had been fears that this was just about the south of the borough, but the majority of the new homes are in SE1 and SE16 I think."