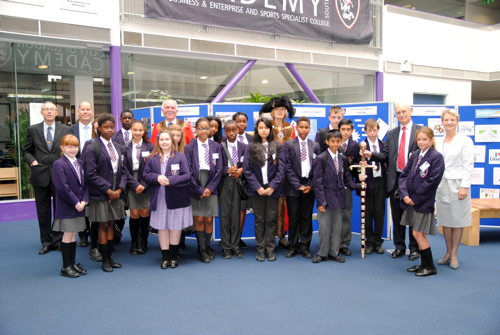 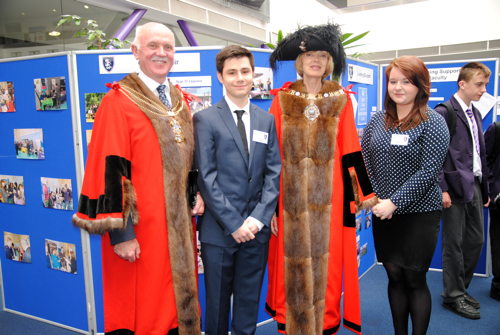 Fiona Woolf CBE, only the second female Lord Mayor in 800 years, visited students in years 7 and 8 to enlighten them about the role of the Lord Mayor and the ceremonial regalia and swords used at official engagements.

The Lord Mayor was joined by Sheriff Adrian Waddingham CBE, who introduced students to the ceremonial sword and its purpose at official engagements, before inviting students to hold the sword for all to see.

The Lord Mayor emphasised the strong link held between Southwark's City of London Academy and the Square Mile: "At the City of London, we recognise the importance of our relationship with the academy.

"Through our 'Working Together' programme, we develop partnerships that create unique learning opportunities and experiences for students in Southwark and across London."

She went on to emphasise the importance of education for today's students, with particular emphasis on science related subjects, including STEM (science, technology, engineering and mathematics).

The Lord Mayor also discussed the role women play in major projects in London, including female engineers working on the Crossrail project.

She recounted a discussion with Archbishop of York John Sentamu who said that he hoped one day he would see the first female Archbishop speaking to a black Lord Mayor of London.

The Lord Mayor was entertained by an selection of songs by the City of London Academy (Southwark) singers, followed by an intense question and answer session with students.

She answered questions from pupils on subjects ranging from her role as global ambassador for UK based financial and business services to her position as an energy lawyer and finally to how Ms Woolf finances her year as Lord Mayor, which is an unpaid position.

Principal Richard Bannister said: "We are delighted that the Lord Mayor of London visited our academy.

"The students thoroughly enjoyed Ms Woolf's presentation, in particular the story of the ceremonial sword, and our students asked Ms Woolf some searching questions about her role as the Lord Mayor of London.

"We feel privileged to be part of the City of London Corporation and able to enjoy the strong links and partnership with this prestigious institution."

The City of London Academy this month received the best A level results in its history. The pass rate remained at 100 per cent, with nearly half of students achieving A*-B grades, and 72% gaining A*-C.

Head boy Tim Ekeh, who will be the first student from the academy to attend Cambridge., said "The links that the academy has with the City of London has opened my eyes to a wide range of experiences that I don't think I would have had elsewhere.

"Attending events hosted by the Lord Mayor has boosted my confidence as I've learnt to network and interact with people from entirely different backgrounds. The corporation's involvement with the school helps bridge a gap and communicate to all the students that a career in the City is accessible to them."

Richard Bannister added: "I am delighted that our A Level and BTEC results are improving this year.

"This confirms the hard work of our students and staff. We are particularly delighted that this is another improving year for successful applications to Russell Group universities.

"Our BTEC students have also enjoyed another successful year with improving results. We are justifiably proud of the achievements of our students and future alumni at the City of London Academy Southwark."