Teacher who built giant chicken given award on live TV

Ben Frimet, an art teacher at the City of London Academy in Bermondsey, received a 'Thank You Teacher' award live on ITV's Good Morning Britain programme this week. 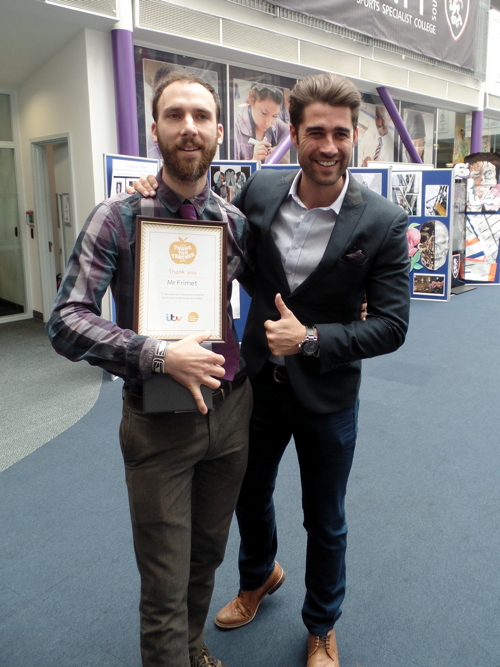 Ben has worked with students after school to create a giant skeleton of a chicken displayed in the academy's atrium and coordinated the work of art, science and English departments in the cross-curricular Chicken Fest project.

GMB's Matt Johnson interviewed Ben about the giant chicken and his work with the students, staff and Chicken Coop.

Ben was then taken through to the atrium where he received a cheer from students and staff, whilst confetti rained down on him.

"It was very heart-warming and lovely to be given a national accolade for something I enjoy doing," said Ben Frimet.

"It was lovely to celebrate the students' and Chicken Coop's work through this achievement."

Principal Richard Bannister said: "I am delighted that we were able to support Ben in this exciting cross-curricular project at the City of London Academy (Southwark).

"Ben really deserves the Award for all the hard work in planning and working with students outside of the school day on the Chicken Fest launch."

• Last week CoLA hosted a launch event for the new primary academy to open in September 2016 at the former Galleywall Primary School site in Galleywall Road.