Boris questioned over future of Coronet at Elephant & Castle

Mayor of London Boris Johnson has been questioned at a public meeting over the future of the Coronet at Elephant & Castle. 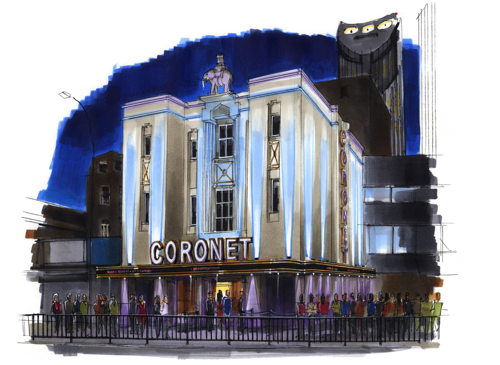 The Coronet's leaseholders want to reveal the building's historic features

Last week Mayor of London Boris Johnson was asked about the future of live music venues in London at People's Question Time in Waltham Forest.

"We're increasingly seeing London's music venues placed under threat of closure, including The Coronet in Elephant & Castle and The George Tavern in east London, to name just two," said the questioner. "Will you work to secure the future of such venues in London?"

The Mayor replied that he is "concerned" about threats to music venues: "I went to huge trouble to protect the Ministry of Sound," he said.

"I don't know whether anybody goes to the Ministry of Sound to strut your funky stuff of an evening.

"We actually bent over [and] we finally got a deal that protected the rights of the revellers at the Ministry of Sound in Elephant & Castle.

"I don't know about the other place that you are talking about but we will see what we can do to help.

"Munira Mirza, my deputy mayor for culture, is totally obsessed with this issue.

"We must protect live music venues.

"London has 400 live music venues. That is more than any other City on earth.

"It's one of the reasons London is the most attractive City from the point of view of people who want to come to listen to music and the cultural capital of the world. So we've got to keep it that way."

In September Boris Johnson signed a letter to English Heritage chief executive Simon Thurley arguing that listed building status for The Coronet would be a "significant obstruction" to the redevelopment of the Elephant & Castle Shopping Centre.

The Coronet's director Richard Littman has set out his vision for the restoration of the building if a new lease can be agreed.

He says that the company has Ł2 million earmarked for refurbishment to make it suitable for a wider range of events, including music, sport, conferences and BBC radio recordings.

Along with the shopping centre, the freehold of The Coronet was part of an Ł80 million acquisition by Delancey and APG a year ago.