The front room of William Blake's house in Hercules Road, Lambeth, has been recreated for a new exhibition at Oxford's Ashmolean Museum. 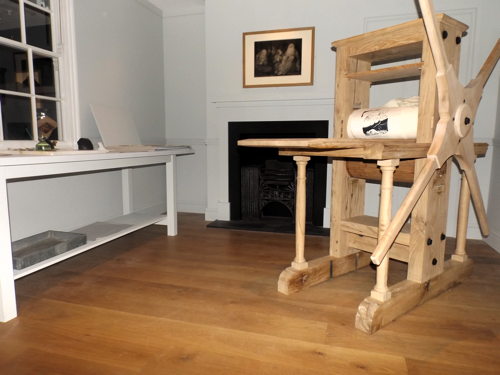 Curator Michael Phillips has been able to establish the dimensions of the ivy-clad terraced house – which was demolished in 1918 – from a 19th-century survey in the City of London's Guildhall Library.

When Blake came to Lambeth from Soho he was "at his most commercially successful" says Phillips – at last able to afford a complete house for his family. The property also had a large garden.

But at this time Lambeth – along with Southwark – was "one of the most noxious areas of London" due to the proximity of so much heavy industry.

Phillips points out that Blake's printmaking relied on a supply of clear water and the artist and his wife would have had to work hard to fetch and filter what was needed.

Accounts from visitors to the Blake's family home record that the artist used the downstairs front room for printmaking and the back room for painting.

A full-size recreation of Blake's printmaking studio has been constructed for the Ashmolean Museum's new exhibition.

Salvage firm Lassco has supplied period fixtures for the room – which measures 14 feet by 11 feet – and timber for the recreation of Blake's press.

The exhibition includes two letters Blake wrote during his decade living in Lambeth.

• William Blake: Apprentice & Master is at the Ashmolean Museum in Oxford from 4 December to 1 March.

• An illustrated catalogue – with a chapter devoted to 13 Hercules Buildings – is available priced Ł25.