Duke of Wellington to unveil Battle of Waterloo memorial at station

The ninth Duke of Wellington will visit Waterloo Station next month to unveil a memorial to the allied soldiers killed in the Battle of Waterloo 200 years earlier. 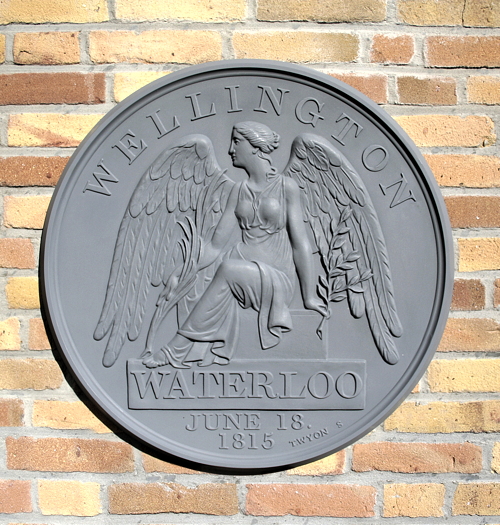 The memorial will be unveiled at midday on Wednesday 10 June on the balcony above the concourse at Waterloo Station.

The memorial is being created, funded and installed by The London Mint Office on behalf of Waterloo 200, the government-backed organisation overseeing the commemorations of the 200th anniversary of the Battle of Waterloo.

As its centrepiece the memorial will feature a supersized replica of the obverse to the Waterloo campaign medal, struck in bronze and 65cm in diameter, which depicts Nike, the Greek goddess of victory.

"It is only fitting for the Waterloo campaign medal to be the focus of a memorial to the soldiers who fought at Waterloo," said James Deeny, managing director of The London Mint Office.

"This was the first medal commissioned to be given to all the soldiers present at a battle, regardless of rank. Before this, medals presented to participants maintained a sense of the army hierarchy, with gold medals being struck for the senior generals."

Sir Evelyn Webb-Carter, co-chairman of Waterloo 200, said: "With the 200th anniversary of the battle this year, it seems only right that these brave soldiers should be commemorated with a plaque in the form of a giant medal that reflects the huge sacrifice that they made.

Not only that, it is at a place that will forever be linked in people's minds to the battle – Waterloo Station – to ensure that they will never be forgotten."

Tim Shoveller of the South West Trains-Network Rail Alliance added: "We are both honoured and privileged to be taking part in the memorial at London Waterloo station.

"Thousands of men lost their lives at the Battle of Waterloo and the station is a fitting place for their ultimate sacrifice to be remembered."

The memorial will also feature a tribute to the fallen soldiers carved in granite, along with the Iron Duke's famous quotation: "My heart is broken by the terrible loss I have sustained in my old friends and companions and my poor soldiers. Believe me, nothing except a battle lost can be half so melancholy as a battle won."

Earlier this month the National Army Museum brought its touring 'pop-up pub' to Waterloo Station to raise awareness of the Waterloo 200 programme of events.

• This year's Waterloo Festival at St John's Waterloo will be focussed on the bicentenary of the battle and includes a debate on whether it would have been better if Napoleon had won.

• Details of local Waterloo 200 events can be found at www.wearewaterloo.co.uk/waterloo200