Waterloo Station was the venue for the presentation of a cheque for more than £200,000 raised for charity by the sale of Battle of Waterloo commemorative medals during the bicentenary year. 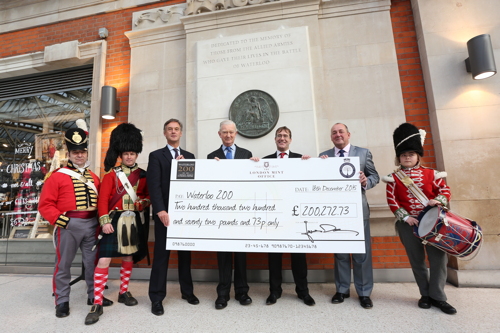 The cheque was presented just before Christmas to Major General Sir Evelyn Webb-Carter and Timothy Cooke, co-chairmen of Waterloo 200, at a special ceremony held in front of the recently installed Battle of Waterloo memorial at Waterloo Station.

Major General Sir Evelyn Webb-Carter said: "The Battle of Waterloo ended 20 years of conflict in Europe and led to almost 100 years of peace and stability.

"Its role in forging the Europe we know today should never be forgotten, which is why the government charged us with keeping the memory of the Battle of Waterloo alive through a range of commemorative activities and an extensive education campaign involving over 2000 schools by 2020.

"The proceeds from the London Mint Office have helped the organisation deliver its principal commemorative events throughout the summer and will be used to continue our education project over the next five years. On behalf of Waterloo 200 we extend our sincere thanks to the London Mint Office and Worcestershire Medal Service for this tremendous contribution."

"But perhaps more importantly we have enjoyed seeing how our Waterloo Commemorative Medals programme has been influential in capturing the profound gratitude of the British public to the soldiers that fought, were injured or made the ultimate sacrifice at the Battle of Waterloo.

"We are pleased to have been able to not only make a significant financial donation to Waterloo 200 but to also have been able to bring to life Benedetto Pistrucci's Waterloo Medal what is arguably the most extraordinary medal in the history of the UK. It is our hope that the money raised will help Waterloo 200 in its continued education project – dedicated to supporting students and teachers to instil a love of history in our children."

As part of the Waterloo 200 commemorations the London Mint Office and Worcestershire Medal Service made available 500,000 free bronze Waterloo Campaign medals to UK citizens and created the UK's first memorial to honour the soldiers of all the Allied armies that fought at the Battle of Waterloo.

Phil McDermott, chairman of Worcestershire Medal Service, said: "We are delighted to see that this project has raised so much for the Waterloo 200 charity which is in excess of our forcasts at the beginning of this journey some four years ago.

"The company is immensely proud of the range of items produced and the extremely positive comments received from those who have purchased pieces and contributed to this great cause that will ensure the changes that this battle made in defining Europe are carried on in education of a new generation."