TV presenter Jeff Brazier visited Lambeth last week to mark the start of construction work at a new 'home away from home' for families whose children are being treated at Evelina London Children's Hospital. 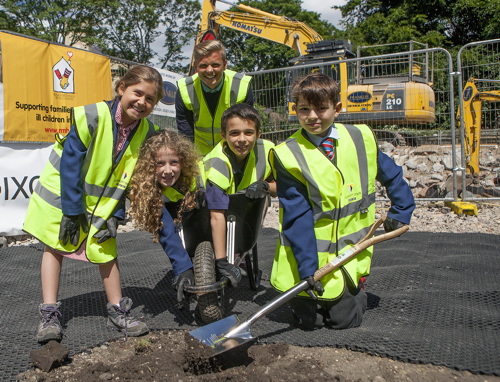 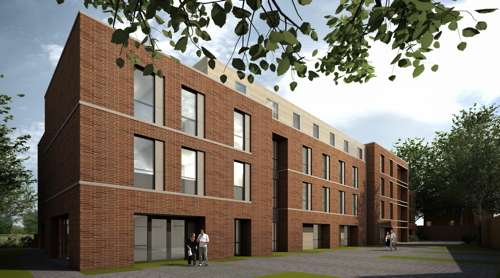 The new Ronald McDonald House Evelina London will have 59 en-suite bedrooms where families can stay free of charge, as well as communal kitchens, lounges and playrooms. Families will be able to stay for as long as they need – enabling them to be on hand for their child at a moment's notice.

The new house replaces the existing 20-bedroom Ronald McDonald House near Guy's Hospital where the Evelina was located until 2005.

The new building will occupy the site of Brian Creamer House, formely a hall of residence for students of King's College London, which is situated close to Lambeth Palace and to the north of Lambeth Road.

Jeff Brazier – a familiar figure to many as a presenter on ITV's This Morning and father to the late Jade Goody's children – donned a hard hat and took up a spade to break the ground to mark the start of construction on a site just a few minutes' walk from the children's hospital.

He was assisted by pupils from nearby Fairley House during a ceremony attended by representatives from Guy's and St Thomas' Charity, which provided the land for the new house and helped to bring together the parties involved in the project, and Guy's and St Thomas' NHS Foundation Trust which includes Evelina London.

The new purpose-built facility will be run by Ronald McDonald House Charities – an independent charity that provides free accommodation on or near hospital grounds across the UK.

Guests also heard from Jon Haward, director of Ronald McDonald Charities, who said: "Each year thousands of children are admitted to Evelina London Children's Hospital for treatment, and having somewhere to stay free of charge and a place to unwind away from the hospital makes a big difference to these families at a stressful time.

"I am pleased that Ronald McDonald House Charities has been able to work with partners to provide a much-needed facility that will make a real difference to families from London, south east England and further afield who are treated at Evelina London."

Dr Grenville Fox, consultant neonatologist and clinical director for the Neonatal Intensive Care Unit and medical specialties in Evelina London Children's Hospital, said at the event: "We're seeing more children having to travel ever greater distances for medical treatment. Some are with us for as little as a day, while others stay for many months.

"This new Ronald McDonald House will provide much-needed support and enhance our family-centred care. I am sure it will prove very popular with families."