Southwark planners have sent low-cost supermarket Lidl back to the drawing board, accusing it of "underdevelopment" of its Old Kent Road site. 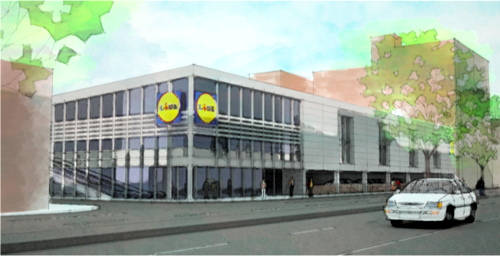 In August we reported on Lidl's plans to rebuild its Old Kent Road store on stilts, with a bigger trading area and an expanded car park.

"The proposed development by reason of the failure to optimise development on site and provide a mixed use development would be an underdevelopment of the site which would result in an inefficient use of the land failing to optimise residential and employment outputs and densities in a site which forms part of the Old Kent Road Opportunity Area and has very good public transport accessibility," says the council's decision notice.

The council says that in pre-application advice to Lidl it had "urged the applicants to explore the possibility of providing a more comprehensive development that took the opportunity to provide much needed housing as well as an improved retail facility" but this suggestion had not been followed up.

Lidl's desire to expand the car park has also been criticised.

"The proposed sales floor area is increasing by 42 per cent but the number of parking spaces is increasing by 74 per cent," wrote planning officer Robin Sedgwick in his report on the application.

"This is an excessive increase that is not justified in line with planning policies."

Do you agree with the council's decision?