The famous elephant statue that stands outside the Elephant & Castle Shopping Centre will be temporarily relocated to Castle Square on Elephant Road when the centre shuts this autumn. 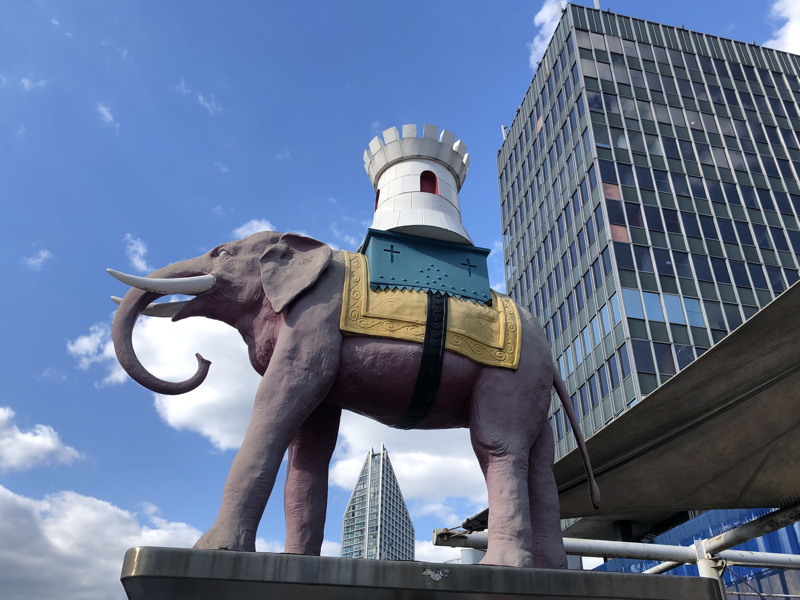 The elephant statue is of the same design as the one which stood above the Elephant & Castle pub until its closure in 1959.

The statue was then relocated as the indoor centrepiece of the Elephant & Castle Shopping Centre when it opened in 1965.

According to local lore, the original was melted down in mysterious circumstances and the version which now stands on a plinth facing the Metropolitan Tabernacle is a fibreglass replica.

With the shopping centre due to close in September, the developers behind the new scheme for the site have announced that during the demolition and construction phases the statue will move to Castle Square on Elephant Road where temporary premises for some of the mall's small businesses are under construction.

"Over the past three years we have listened carefully to all of the suggestions and support received from the local residents regarding the community's much-loved Elephant landmark statue," said a spokeswoman for the developers.

"We have been keen to keep the Elephant in the local area and are now therefore pleased to announce that the Elephant & Castle statue will be moving to its new home in Castle Square in October this year.

"Ahead of the move the statue will be refurbished and repainted before it takes up residence in its new elevated position in Castle Square for all to enjoy.

"Having the Elephant in Castle Square will allow it to remain in the heart of the community and for the 25 businesses from the shopping centre who have relocated to this area to remain trading in close proximity to the iconic landmark which has been the emblem for the area for more than five decades.

"We are also looking at where the statue can move when the new town centre launches in five years' time and will be working with the local community and stakeholders over the coming months and years.

"The refurbished statue will be unveiled in its new location in October as part of the ongoing events and activities taking place in Castle Square. We will be announcing more details soon."

In recent days the shopping centre owners have also said that the current rent-free deal for independent shopkeepers will be extended to the market traders who have stalls outside the centre, after discussions with market operator Urban Space Management.

Local group Latin Elephant had highlighted the disparity between the arrangements for traders inside and outside the centre, and stallholders had raised a petition asking for help.

• This week Poundland closes its doors for the last time and next week Boots shuts its branch in the shopping centre.