An extension of the Bakerloo line from Elephant & Castle to Lewisham could be completed in 12 years, according to Transport for London's new business plan. 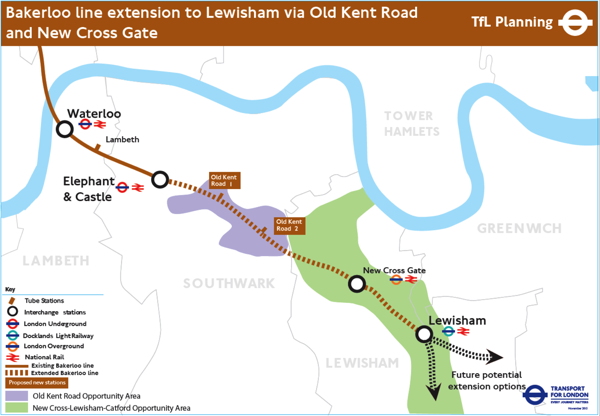 Previously touted for completion in 2030, Transport for London now says that the Bakerloo line could be extended to Lewisham via Old Kent Road as soon as 2028/29.

The Old Kent Road is designated as an 'opportunity area' in London planning policy with 20,000 new homes likely to be build over the coming years.

Developers will be required to contribute to the Ł3.1 billion cost of the new tube link.

Current plans assume the construction of two new Bakerloo line stations in Southwark – one near Tesco in SE1 and another near Toys R Us in SE15.

TfL will hold a further consultation on plans for the Bakerloo line extension in the New Year.

Southwark's director of planning Simon Bevan recently told a meeting of the borough's overview and scrutiny committee that the council would have to work on schemes other than the Bakerloo line extension to boost transport links to Old Kent Road, as many thousands of new homes are likely to be built well before any tube line opens at the end of the next decade.

The council has commissioned studies by consultants to examine options including segregated bus rapid transit (BRT) lanes in the centre of the road, as well as improved cycle routes.