Traders at the Elephant & Castle have told Southwark councillors they are "crying out" for extra help with just six months left till the shopping centre closes for good. The council has announced an extra £200,000 to assist affected businesses. 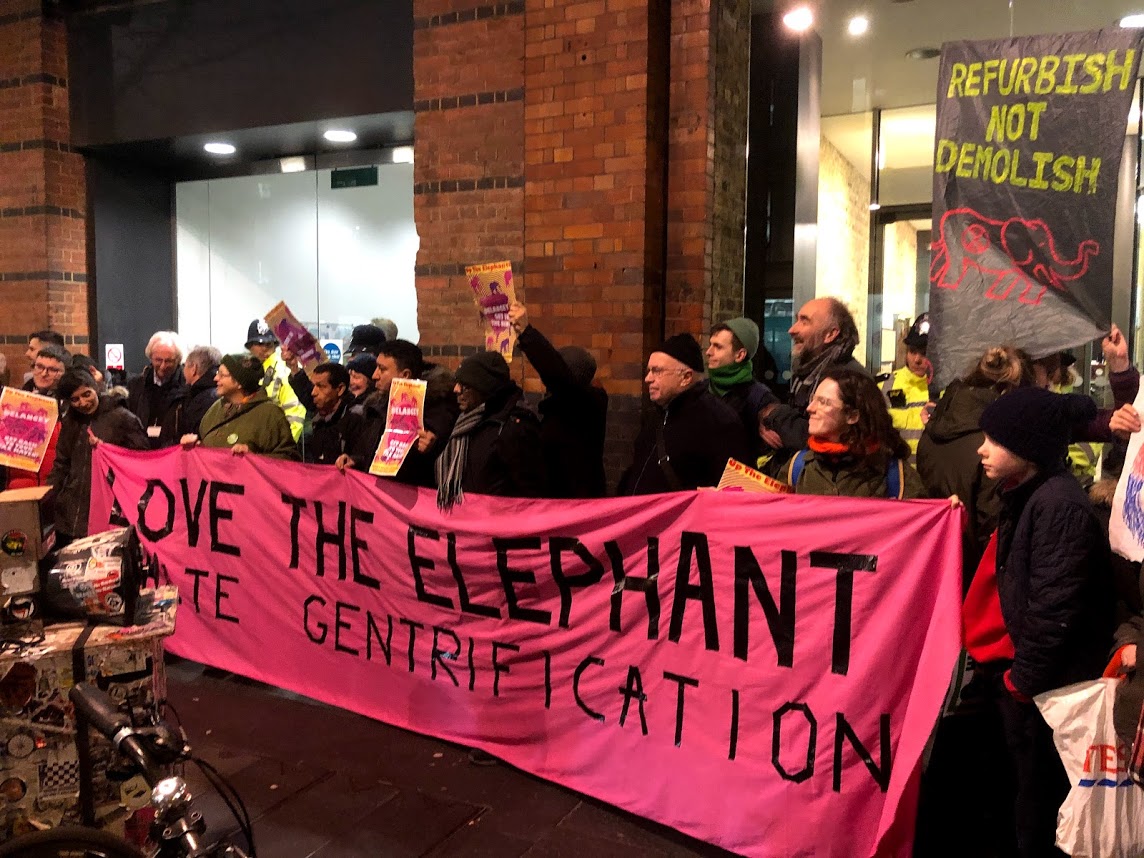 Campaigners from Up the Elephant gathered outside Southwark Council's Tooley Street offices on Tuesday night ahead of the council assembly meeting.

The protesters are calling for a better deal for the dozens of small businesses that will have to relocate as a result of the redevelopment of Elephant & Castle Shopping Centre.

Patria Roman of the Latin Elephant group said that more than 60 traders still had no firm relocation plans in place.

Other speakers at the rally included Paul Heron of the Public Interest Law Centre, who said that Delancey's scheme included a mere "smidgen" of social housing and that local communities should continue to challenge such proposals.

The Up the Elephant campaigners were joined by members of Extinction Rebellion Southwark who oppose the demolition of the shopping centre and London College of Communication buildings on environmental grounds, arguing that refurbishment would be less wasteful of energy.

Inside the meeting, Cllr Johnson Situ, cabinet member for growth, development and planning, pre-empted the traders' deputation by announcing Ł200,000 of council support for local businesses, in addition to the package funded by developers Delancey and tied to the planning permission for the scheme

"We know this is an anxious time for traders and the council wants to make sure it is offering whatever support it can to help them find and move into new premises in and around the Elephant & Castle area," said Cllr Situ.

"Many businesses have already been offered an affordable unit nearby but others are still worried about the future.

"The benefits of the centre's re-development are clear – a much-needed new ticket hall for the Northern Line, a new home for the London College of Communication and new open spaces, retail, culture and leisure facilities to bring people to the area and new homes including 116 homes at social rents.

"We are committed to ensuring the benefits of the new development will not be at the expense of the traders who have made the centre their home. We want to enhance and complement the vibrant and diverse culture of Elephant & Castle, not diminish it."

Emad Megahed, who runs a business in the shopping centre, said: "The traders at the Elephant & Castle are crying out for the council's support ... we don't feel listened to ... we are at risk of being commercially homeless".

Mr Megahed raised a number of concerns, including the higher costs for businesses moving into the council-owned Elephant Arcade at Perronet House compared to the Delancey-owned shops under construction at Castle Square.

The Elephant & Castle Shopping Centre is due to close on 30 July this year. Shoe Zone is the latest business to put up 'closing down' signs.