Councillors and supporters of the Save the Borough Market Area Campaign have been out encouraging Saturday shoppers to oppose the Thameslink scheme. 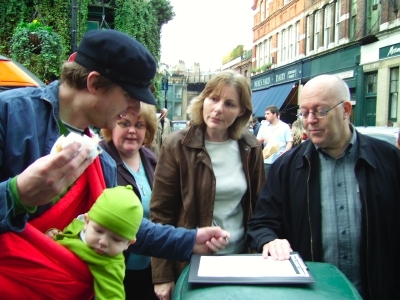 Although the Government has now given the go-ahead to plans for an additional viaduct through Borough Market, the campaigners hope to persuade Network Rail to adopt an alternative route via the Elephant & Castle.

They argue that there is still time for a rethink since funding is not yet available for the controversial scheme.

Local Liberal Democrats, led by Cathedrals Ward councillor Adele Morris, have been in Borough Market collecting signatures for a petition to be sent to Network Rail and Communities and Local Government Secretary Ruth Kelly.

The Market residents' campaign SABMAC has an online petition but is also urging local residents in the area to write to Ruth Kelly, the Minister for Transport and London Mayor Ken Livingstone.

"It's never too late," says Jackie Power of SABMAC. "While the buildings are still standing there's still hope, isn't there?

"Over the last 20 years we've had to fight every step of the way.

"There is an appeals mechanism which we're looking at to see if there are grounds for appeal."