The Princess Royal was guest of honour at an event to thank donors to the £10 million fundraising campaign for the Evelina Children's Hospital in Lambeth Palace Road. 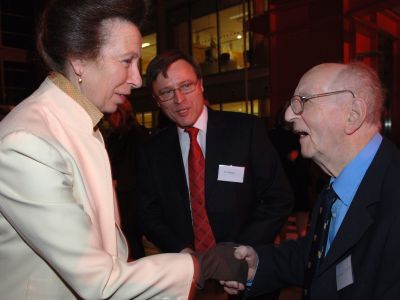 Major donors, individual fundraisers and company representatives that have supported the Evelina Children's Hospital Appeal were formally thanked for their contributions.

The funds helped equip the Evelina Children's Hospital. Key pieces of equipment include a Ł1.7 million MRI suite which enables clinicians to diagnose a range of disorders; as well as equipping the intensive care unit and a multi sensory room.

More than 100 guests met HRH Princess Royal who is patron of the Evelina Children's Hospital Appeal.

"We were delighted to once again welcome HRH The Princess Royal to the Evelina Children's Hospital," says Sir Jonathan Michael, chief executive of Guy's and St Thomas' NHS Foundation Trust.

"The support she has given to the hospital and the Evelina Children's Hospital Appeal has been amazing.

Guests were treated to a spectacular performance by Viva – the aerial gymnasts that have appeared on the BBC1 ident.

Musical entertainment was provided by students from the Royal College of Musicians and jazz maestro Phil Peskett. The National Theatre provided the lighting.

The entertainments showcased the Guy's and St Thomas' Charity performing arts programme, which provides performances, poetry and drama workshops for patients in the Evelina Children's Hospital on a weekly basis.

The appeal is continuing to raise funds to support the needs of the hospital, initially focussing on purchasing equipment for the eye department, including an ultrasound biomicroscope. This will be used to examine patients with glaucoma, which can lead to blindness. It will provide detailed images which will help to guide surgeons during operations to alleviate the problem.