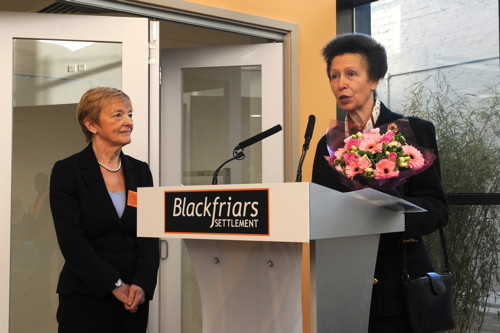 Baroness Wheeler of Blackfriars with the Princess Royal 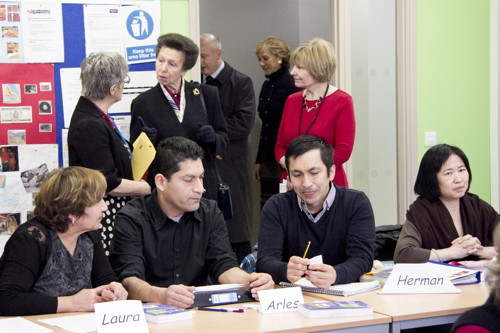 The 126-year-old local charity moved back to Rushworth Street this summer after three years operating from temporary premises on Great Suffolk Street during the building works.

The old settlement complex on Rushworth Street – which included an assortment of prefabricated buildings – has been replaced with a purpose-built community centre and 36 shared ownership homes.

The new building – designed by Shepheard Epstein Hunter – has been developed by Notting Hill Housing Trust. It includes two floors of space for the settlement's educational activities and services for older people.

Princess Anne was greeted by the Blackfriars Nightingales, the older people's service's choir, singing "I'd Like to Build the World a Home".

In a tour lasting more than an hour the Princess met and talked to many of the centre's users and those involved in bringing the project to fruition.

Wednesday's opening ceremony was not the Princess Royal's first contact with the settlement. She last visited the charity in 1969 when she toured its Nelson Square premises.

Unveiling a plaque to commemorate her return visit, the Princess remarked that although local people's needs may have changed over the years, the requirement for accessible space for community activities is an enduring one.

Guests at the opening ceremony included the Mayor of Southwark, Cllr Abdul Mohamed, council leader Cllr Peter John and other senior councillors and officers, as well as Simon Hughes MP.

Catering for the event was provided by the soon-to-open Shangri-La hotel at the Shard and local firm SE1 Events also gave support.

"This building underlines the endurance of Blackfriars Settlement and its ability to adapt to the changing circumstances and continuing funding challenges," said Cllr Mohamed.

"Alongside the dedicated staff team, I would like to pay tribute to the volunteers including the trustees who are the lifeblood of our community."

Baroness Wheeler of Blackfriars, chair of the charity, said: "We hope the new centre will make a significant impact within the local community, from young to old.

"Today marks the culmination of a long-held vision for Blackfriars Settlement to give local people some of the high quality facilities they deserve. This is the next chapter in our 126-year history in SE1."

Director Julie Corbett-Bird said: "It was wonderful to see so many of our centre users involved in the opening. The local community has had input into the shape and use of the building and we look forward to it becoming a vibrant centre for community life."

The new centre includes classrooms named after Anne Worsley and Barbara East, both well-known local figures who each played a key part in the charity's history.

The Borough Music School, which Anne Worsley founded, will soon move its activities to the new Rushworth Street centre.