Beetham Tower seen from the north 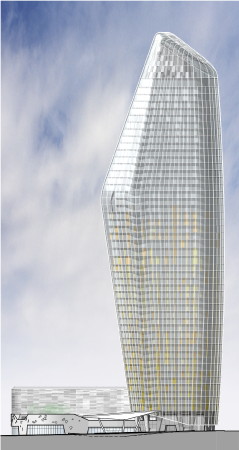 The planning committee, sitting in the council chamber, agreed to the application shortly after 10pm on Tuesday following a three hour meeting.

The scheme for the site, bounded by Blackfriars Road, Upper Ground, Rennie Street and Stamford Street, involves not only the tower, which includes a hotel and apartments, but a six storey affordable housing block on Rennie Street.

Local ward Councillor Adele Morris, appearing before the committee, expressed oppostion to the tall building and the parking provision which breached Southwark's guidelines. She was also concerned that the affordable housing for families, not on site, should still be built within the area.

Fellow Cathedrals Ward councillor David Noakes, who also addressed the committee, raised questions about height and views, stressing that he was reflecting the opinions of constituents who had contacted him.

Earlier a delegation from nearby River Court reported the concerns of residents about increased traffic in Upper Ground, pressure on medical services following an increase in population and poor television reception caused by a tall building. Mary Walker, who said she was speaking for 32 residents, requested that any building work should involve drilling rather than the pile driving which might cause vibration.

Several committee members were opposed to the "generous" underground parking provision and eventually it was agreed that the hotel should have 33 spaces rather than the proposed 50 whilst 29 would be available to residents.

Cllr James Barber, who had strongly questioned the need for parking and criticised the location of the cycle storage facility, voted against granting planning permission.

Beetham chairman Hugh Frost, who said that the high-rise apartments were targeted at those who would normally invest in Mayfair, claimed that the tower would create a gateway to Southwark. He confirmed his intention to complete the development by 2012 with the hotel being open for Olympic Games guests.