Proposals for a major mixed-use development between New Kent Road, Elephant Road and Walworth Road have been given the green light by Southwark's planning committee. 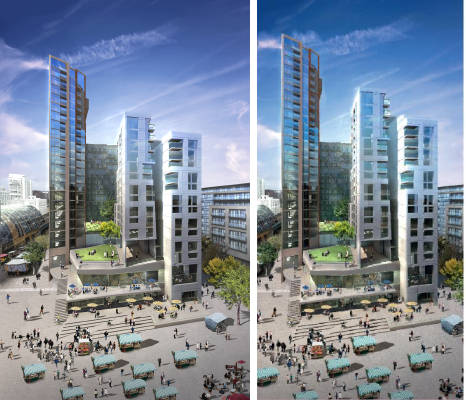 The 2006 version seen from the south (left) and the scheme approved this week (right). The towers are now slightly taller. 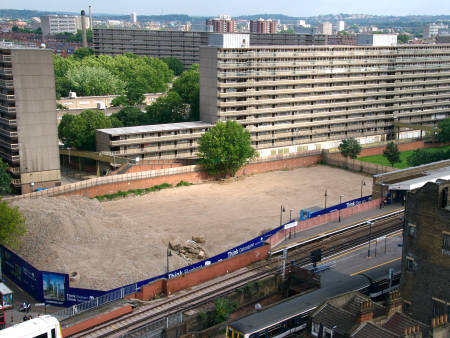 The cleared site of the development seen from Metro Central Heights

An earlier version of the Oakmayne Plaza development was approved in 2006, but this year the developer submitted a revised application for the site which until recently was occupied by Volvo dealership HR Owen.

Now the development has been altered to include student accommodation instead of a hotel and proposed office space has been shelved in favour of residential apartments. As well as a supermarket, the scheme's retail space has also been increased to provide more small shop units which will be offered to existing local small traders.

The committee chair, Cllr James Gurling, described Oakmayne's agreement to co-operate with the relocation of existing local traders as "exceptional" and "unprecedented".

Hailing the small business relocation plans as "a sensible and progressive decision", he noted that "the developer would rather have Marks & Spencer, Accessorize and God knows what".

Oakmayne's planning agent told the committee that the hotel element of the scheme had fallen through because hotel operators felt that it was premature to open visitor accommodation so early in the regeneration of the area. He said that the only interest had been from budget hotel chains who wanted to "dumb-down the design" which Oakmayne felt would "severely compromise the development".

The 247-room student residence will front New Kent Road. Oakmayne says that its prospective operator – Liberty Living – has received expressions of interest from both the University of the Arts London (which includes the London College of Communication) and King's College London.

All 312 residential units – 231 of which will be in a 23-storey tower facing Elephant Road – are for private sale; the developer is providing an in-lieu affordable housing payment of £1.5 million which will help the council to fund the new housing for current Heygate Estate tenants.

Oakmayne says that it is in negotiations with two major cinema chains over the proposed six-screen cinema which will have its entrance on New Kent Road.

As for the removal of the office component of the earlier scheme, the committee heard that speculative office developments at the Elephant & Castle are not being taken up and banks are reluctant to fund such developments at this point in the economic cycle.

Councillors also approved an application for a new market square that will sit mid-way along Elephant Road between the Oakmayne Plaza development and Elephant Road Park at the Walworth Road end.

Work on the Oakmayne Plaza site, which has already been cleared, is due to start early in the New Year.

"The fantastic plans for the heart of the Elephant are particularly good news as it supports this council's commitment to provide great retail space for local traders," says Cllr Richard Thomas, Southwark Council's executive member for regeneration.

"The revised plans that went through last night incorporated more prominent space for businesses, to make sure local shops can benefit from the area's regeneration. And equally importantly, many will be offered at subsidised rents over the first five years to give further support for traders.

The Oakmayne Plaza development will be linked up to the new multi-utility services company (MUSCo) at the Elephant and Castle which will co-ordinate heat and power utilities, data and high-tech waste collection across the area.

Cllr Richard Thomas, executive member for regeneration, said: "The MUSCo contract is vital because sustainability must be a key component of the scheme, helping to keep the resulting development carbon neutral.

"The Elephant and Castle scheme is a fantastic opportunity to bring in very high quality, environmentally-sound services, and Southwark should be seen as setting a new standard for green communities.

"Sustainability is a big issue and quite rightly a topic on everybody's lips these days. But Southwark is doing more than just discussing possibilities, we are taking major steps which will have a real impact on residents' lives."