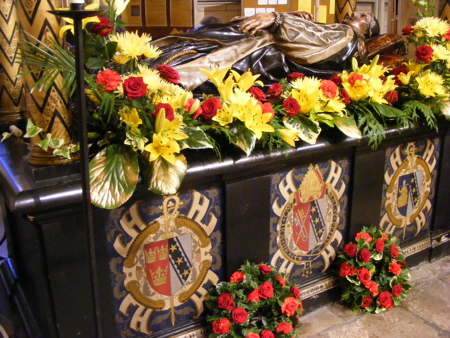 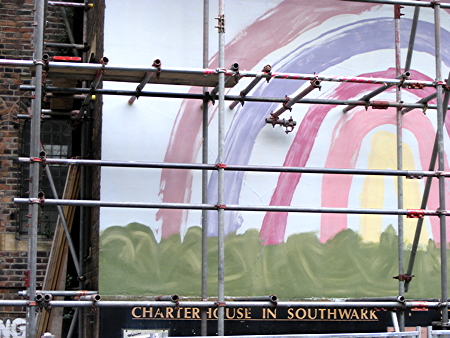 The Rainbow Building in Crosby Row, former home of the Charterhouse-in-Southwark charity, is currently being demolished. St Hugh's Church will be rebuilt as part of the new development of flats.

Bishop Andrewes, who at the end of his life lived at Winchester Palace in Clink Street, chaired a team of translators working on the the King James Bible which was published 400 years ago.

This year also marks the 400th anniversary of the foundation of Charterhouse school and hospital for pensioners by Thomas Sutton who died in 1611. Andrewes became the school's foundation governor.

"This great church was hung with 165 yards of black baize paid for by parishioners when they came to bury Bishop Lancelot Andrewes," said Bishop of London Richard Chartres during his sermon.

He commended Charterhouse, "an institution founded exactly 400 years ago to educate the young and care for old together", as an example for today.

In the 19th century the school moved from its monastic site in Smithfield to Surrey and shortly afterwards Old Carthusians, former pupils, set up the Charterhouse-in-Southwark Mission in West Bermondsey to help the young and old. The charity ceased to operate in the area in 2008.

Also at the service on Monday evening was a strong representation from Merchant Taylors School where Bishop Andrewes was educated. The school is this year marking its 450th anniversary.

As its choir sang an anthem, a pupil and a Charterhouse Brother presented two wreathes to the Bishop of Southwark to be laid at Lancelot Andrewes' tomb.

The Master of Charterhouse James Thomson read a lesson.

The visit to Southwark by the Charterhouse foundation came just a week after it was announced that the new St Hugh's Church on the corner of Crosby Row and Porlock Street will lose the official name of 'Bermondsey, St Hugh (Charterhouse Mission)'.

The church is being demolished to be replaced by flats with a ground floor church to be known as simply 'St Hugh's, Bermondsey'.

But the dates of Thomas Sutton remain recorded above the doorway of the London Christian School, a former Charterhouse building, in Tabard Street.

Also present at the service were Bruce Saunders, canon pastor and priest-in-charge of St Hugh's, and Katharine Rumens, former curate at St John's Waterloo and today's successor to Lancelot Andrewes as rector of St Giles Cripplegate.