More than a hundred building workers and other trade unionists marched from Tate Modern to the Health and Safety Executive in Southwark Bridge Road. 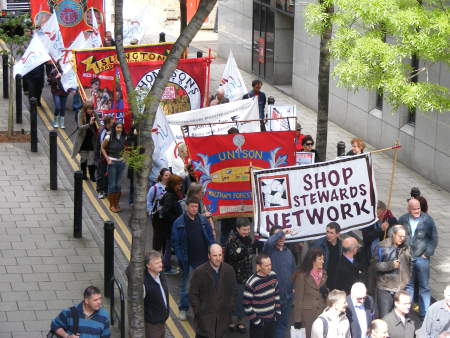 The march makes its way along Park Street 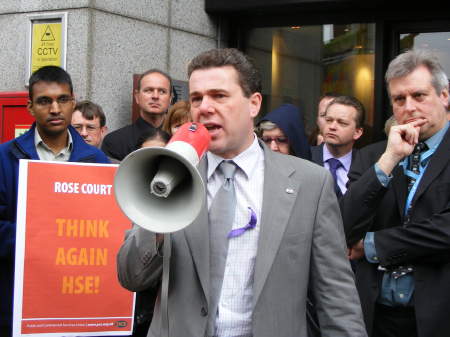 The rally on Monday outside the HSE London HQ at Rose Court coincided with the annual International Workers' Memorial Day commemorating those who have died, suffered ill-health or been injured at work.

More than a hundred trade unionists were joined by Rose Court staff to call for zero tolerance of preventable workplace injuries and deaths, tougher regulation and increased resources for the HSE.

Simon Hester, Sub Branch Rep for the union Prospect at Rose Court, told the marchers that the HSC had only 40 inspectors for London's building sites and some major incidents were not investigated due insufficient staff. Earlier this month the HSE announced that 69 construction workers were killed at work last year.

Chris Hurley, Rose Court's PCS secretary, announced a petition against HSE's plans to reduce staff in Southwark and move the remaining members to Bootle. She claimed that fewer than ten of the 320 staff at Rose Court had agreed to the move.

"It is time for management to think again before it is too late," she warned.

The rally ended with a minute's silence for the recent dead.

PCS general secretary Mark Serwotka, who arrived late due to traffic chaos caused by the flooding, commented: "Members in HSE are delivering improvements to the lives of millions in this country. Yet management think it is acceptable to lose these experienced staff. In addition to the personal traumas being imposed on staff, the loss of so much experience puts all workers at risk. This petition ought to cause management to pause and think again about the action they are taking."