The gangway leading to HMS Belfast collapsed last November because a subcontractor "cut through the structure of the gangway without sufficient support", according to a statement issued by Imperial War Museums (IWM). 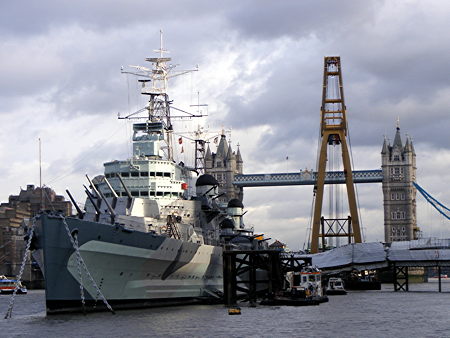 IWM has announced that HMS Belfast – which has been closed to the public since the ship's gangway collapsed into the Thames on 29 November – will reopen on Friday 18 May.

Curators have organised a weekend of free events on 26 and 27 May to celebrate the reopening.

"HMS Belfast shows first hand what it was like to live and work on board a warship," says director Phil Reed.

"Since her arrival on the Thames, more than 40 years ago, she has grown to be a national symbol of the efforts and endurance of sailors who took part in the Arctic Convoys, D-Day, the Cold War and Korea.

"London hasn't been the same in the six months that the iconic HMS Belfast has been closed.

"Its reopening in May has been a long time coming and is a cause for great celebration. And that is what we plan to do – celebrate, with all manner of exciting, fun and engaging activities and attractions on board."

The collapsed section of gangway was lifted out of the river last December and since then investigations have continued.

"Since the incident, we have worked with the Port of London Authority and the Health and Safety Executive (HSE) to develop and implement a full recovery plan, and begin work on a replacement gangway which is now under way," said an IWM spokesman.

"We have also worked with both the HSE and with our insurers, with whom we jointly appointed an independent investigator, to establish the cause of the damage to the gangway.

"These investigations have allowed us to conclude that the failure resulted from a subcontractor who, while carrying out refurbishment works, cut through the structure of the gangway without sufficient support.

"The HSE investigation is still under way. We will receive their detailed report later this year."

The ship is due to receive two royal visitors next month.

On Wednesday 9 May the Duke of Gloucester will visit HMS Belfast to attend a Victory Day ceremony dedicated to the Arctic Convoys in the Second World War.

The Princess Royal is due to visit the ship on Thursday 31 May as patron of the Special Forces Club and commandant-in-chief of the First Aid Nursing Yeomanry (Princess Royal's Volunteer Corps).