The Dean of Southwark's Roman Catholic Cathedral, Canon James Cronin, has been presented with an illuminated scroll by the Southwark Civic Association. 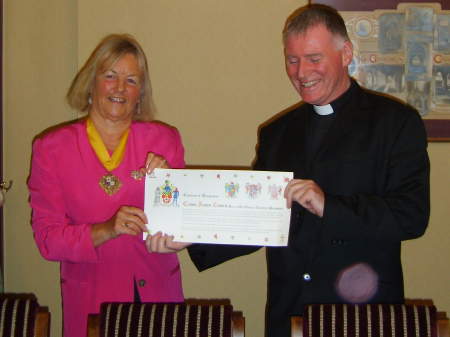 At a special ceremony held in the Chapter Room at St George's Cathedral, Canon James Cronin was honoured for his work as Cathedral Dean in building links with the local community and for the very strong bonds which he had established with the Southwark Civic Association.

Presenting an illuminated scroll to Canon Cronin, Hilary Wines, past Mayor of Southwark, congratulated him for all that he had done in the twelve years since the Civic Association had been formed, and complimented the Canon and his staff on the very warm welcome that was always given at St George's.

Hilary Wines' praise was echoed by Ken Hayes, chair of the Civic Association, who looked forward to the continuance of the relationship between the Cathedral and the Southwark community.