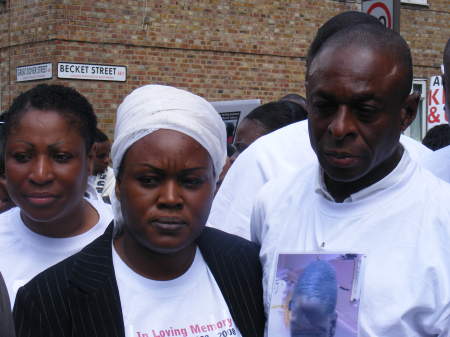 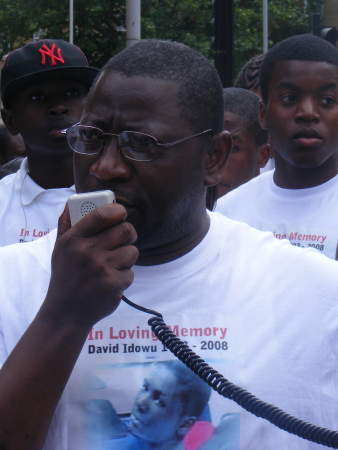 Cllr Mackie Sheik: "The borough is gripped with fear" 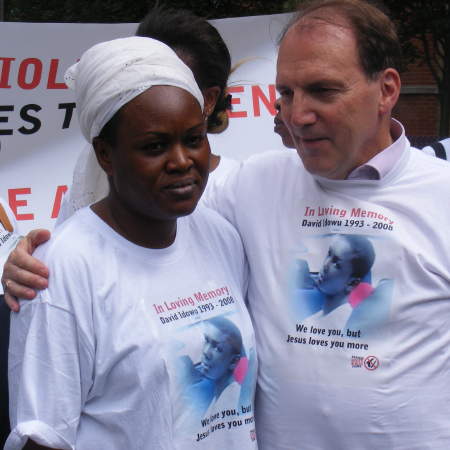 The crowd of family, friends and neighbours from the Tabard Gardens Estate gathered in Becket Street, close to the spot where Walworth Academy pupil David Idowu, 14, was fatally wounded on 17 June. He died in hospital on 7 July.

"Knife crime should be addressed by everyone; everybody in this society," said David's mother Grace Idowu, reading a statement in front of a scrum of TV cameras and photographers.

"The Government, parents, young people as well as old.

"The solution to this demonic epidemic is by going back to God, pleading for revival.

"We need to set aside one day of national prayer in this great nation to pray to God for divine intervention."

"Whose life is to be taken next?" asked Mrs Idowu, calling for tougher sentences for those convicted of knife crimes.

"Demons are possessing these younger ones to carry knives in order to destroy what we hold precious," she said.

She ended by expressing gratitude to friends and neighbours.

"I must thank all those who have stood by us since the beginning of this family tragedy," she said.

"I thank my MP, my councillors, my families, my pastors ... my church members.

"I thank my neighbours, my community, my youth supporters. I thank you very much ... thank you for supporting us at a time like this."

David's older brother Peter said: "We just have to be strong for each other; be there for each other. What we're doing now is just to stop other families being affected like this, because it's not a nice experience to go through."

The gathering was also addressed by Simon Hughes MP who paid tribute to the "incredibly impressive" dignity and compassion of Grace and Tim Idowu as they prayed at the bedside of their son after he was wounded.

"We're here in spite of the most terrible unnecessary thing happening with a message of hope and positive response," said the North Southwark and Bermondsey MP.

"It isn't inevitable that children stab each other with knives. It doesn't have to be happen like that."

Chaucer Ward councillor Mackie Sheik said: "The borough is gripped with fear", though he stressed that Chaucer ward is "relatively quiet and peaceful".

He urged residents to work jointly with local police and the council to combat knife crime.

"Today we have to be very vigilant. We have to open our eyes ... it's a real problem.

Cllr Sheik also recalled the recent murder of Lyle Tulloch just a few yards away on the Rockingham Estate.