Supporters of the troubled Cross River Tram scheme have presented a 1,000-signature petition at City Hall calling on the Mayor to give the go-ahead. 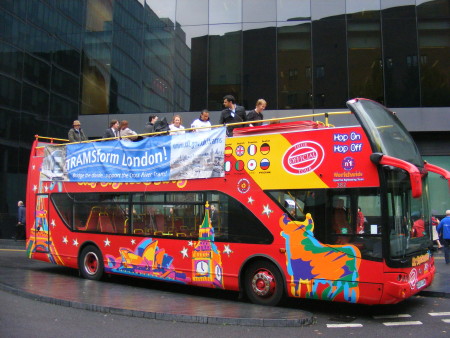 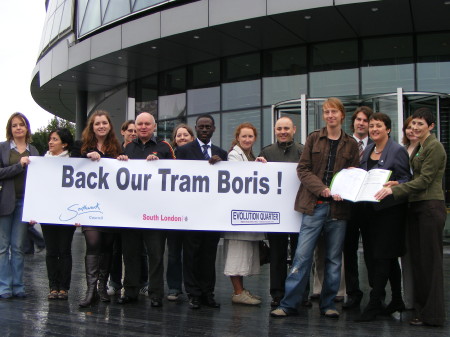 Earlier the campaigners – joined by Labour and Lib Dem councillors – travelled by open top bus along part of the proposed tram route from Peckham to Aldwych via Waterloo Bridge. The stunt was organised by the Evolution Quarter Residents' Association in North Peckham.

After being met by Caroline Pidgeon AM, the Liberal Democrat transport spokesperson, the passengers handed the petition and a dossier of support to London Assembly transport committee chair Val Shawcross AM outside City Hall.

The petition, which will be formally presented to the London Assembly by Val Shawcross on Wednesday, calls on the Mayor "to confirm his commitment to the Cross River Tram and to do everything in his power to ensure that it is delivered as soon as possible".

The demonstration of support coincided with the London Assembly transport committee's Cross River Tram seminar where calls were made for the Mayor and central government to fund the new link from Brixton and Peckham in the south to King's Cross and Camden Town in the north.

Among those supporting the tram from the platform were Val Shawcross, Caroline Pidgeon and Southwark councillors Paul Noblet and Jenny Jones. Also present were SE1 councillors Adele Morris and David Noakes.

Philip Goodwin, Croydon's director of planning and transportation, said that the introduction of Tramlink in Croydon had removed 7,000 cars per day from the town and reduced pressure on car parks.

Brian Coleman, Conservative London Assembly member for Barnet and Camden, claimed that the tram would increase congestion in Holborn and promised to oppose the scheme "hook, line and sinker". However, representatives of the inHolborn business improvement district and the Chancery Lane Association pledged support.

Val Shawcross says she is pessimistic about the prospects for the Cross River Tram after Boris Johnson's comment last week that he doesn't intend to spend much more money on the scheme but she will continue to make the case for the new transport link.

Conservative transport spokesman Roger Evans, writing about the seminar on his blog, concluded that "with the need to tighten belts and face the recession, Cross River Tram could be a goner".