Campaigners in favour of the threatened Cross River Tram scheme have launched a petition calling on Boris Johnson to ensure that the plans aren't quietly dropped by the new City Hall regime. 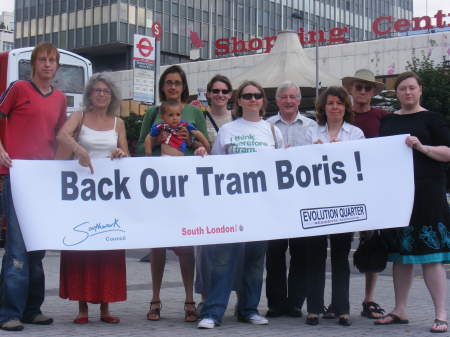 The petition, launched by the Evolution Quarter Residents' Association in north Peckham, highlights the economic benefits that the proposed tram offers to some of the capital's largest regeneration projects.

The tramway would link Camden Town in the north with Brixton and Peckham in the south and would cross the river at Waterloo Bridge. The Elephant & Castle would be a key interchange.

The petition also recognises the importance of this scheme in reducing overcrowding on certain bus routes and sections of the London Underground.

Since taking office at City Hall Boris Johnson has been luke-warm about the Cross River Tram promoted by his Labour predecessor, claiming that the scheme is under review with a decision expected in the autumn.

The campaigners gathered at the Elephant & Castle on Saturday to launch the new petition which has cross-party backing from Southwark politicians.

"The tram in Southwark is absolutely essential for the regeneration and future of all parts of the borough, right from Peckham up through the Aylesbury and the Elephant & Castle," says Fiona Colley, Labour councillor for Nunhead and East Peckham.

"There's absolutely no doubt in this borough that all the parties are united and we want the tram."

Cllr Colley is also calling on Southwark's Conservative politicians to use their influence to lobby Tory mayor Boris Johnson in favour of the tram.

Lib Dem Cllr Jonathan Mitchell (East Dulwich) is clear about the potential of the Cross River Tram to boost the local economies of the areas it serves.

"It's in all of our interests that parts of South London that are under-developed get the benefit of the tram as an additional transport link for international and local and London visitors to get there and help to bring up the economy in those areas," he says.

Supporters of the Cross River Tram can add their names to the petition online.

A group of residents will present the petition to Val Shawcross AM & Caroline Pidgeon AM, chair and vice-chair of the London Assembly Transport Committee, at City Hall in September at the start of a seminar on the tram scheme.