Proposals by Labour councillors to affix a giant 'Back the Tram' banner to Southwark Council's new Tooley Street offices has hit a snag: the building is in a conservation area.

The banner proposed by Labour councillors 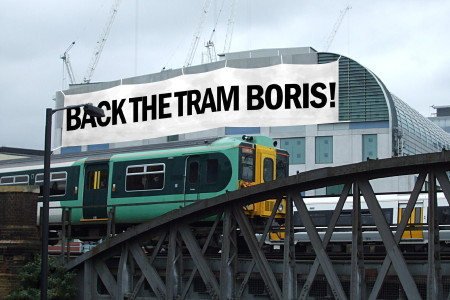 Southwark Labour councillors have tabled a motion to be considered at next week's Council Assembly meeting for a large banner calling on the Mayor of London to back plans for a Cross River Tram to be fixed to the council's new premises across the road from Boris Johnson's City Hall office.

Labour councillors say that the banner would provide Boris Johnson with a daily reminder of the cross-party support for the CRT in Southwark as the Mayor would be forced to cycle past it on his way to work.

Council staff will begin to move into the new building at 160 Tooley Street in the New Year.

The Cross River Tram would link Camden Town in the north with Brixton and Peckham in the south via the river crossing at Waterloo. The scheme is also important for the Elephant & Castle regeneration programme.

Although the Mayor last month said that he is "not intending to spend a lot more money on the Cross River Tram, he is said to have made "positive noises" at a meeting with local politicans and businesses last week.

"Boris Johnson has spent months hinting that he might scrap the tram as though he has a secret plan and isn't willing to tell us it yet," says Labour transport spokesman Cllr Barrie Hargrove.

"We want Boris to know that we've had enough of hanging on. We want this issue out in the open; no withering on the vine, no cover up, no sweeping under the rug at City Hall.

"This is one of the issues that councillors in Southwark from across the party spectrum agree on. The CRT is massively important for our borough and for the future development of some of the most deprived areas in London;

But Southwark Council – which is controlled by a Lib Dem/Tory coalition – has poured cold water on the Labour proposal.

"Southwark Council is in full support of the Cross River Tram and has been pursuing all avenues to secure the future of the scheme," a spokesman said last week.

"However, the proposal to erect a banner would require consent from the council's landlord, and as the Tooley Street building is in a conservation area, would also require a temporary advertising consent.

"This would mean a shift in planning policy and would set a precedent about advertising in conservation areas, which the council could not support in the long term.

"The executive member for regeneration recently met with the Mayor of London, and the leader is meeting with [Deputy Mayor] Sir Simon Milton [this] week to continue to make the case for this important transport project."

• Simon Hughes MP has tabled an Early Day Motion in the House of Commons to seek parliamentary support for the Cross River Tram. At the time of writing only six MPs have signed the motion.