Sandi Toksvig was joined by Lesley Garrett for the launch of the Various Voices festival of lesbian and gay, bisexual and transgender choirs outside the Royal Festival Hall on the South Bank on Friday morning. 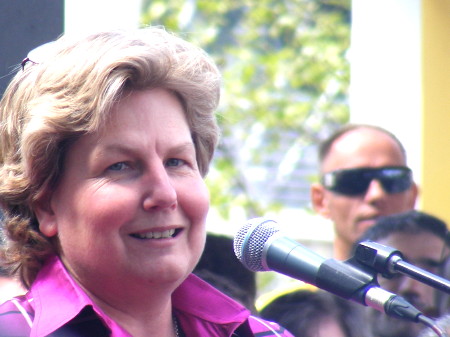 Sandi Toksvig at the launch of Various Voices

Dozens of lesbian and gay, bisexual and transgender choirs are performing at Southbank Centre during the four-day festival of music and song.

Lesley Garrett sang 'You'll never walk alone' and led the assembled choirs in the festival song 'Here's Where I Stand'.

The festival includes an observance of Justin Fashanu Day on Saturday.