Lambeth families living next to the Coin Street Neighbourhood Centre in Stamford Street could soon find themselves turned away from the children's centre, whilst Southwark residents living a few yards away will still be able to visit. 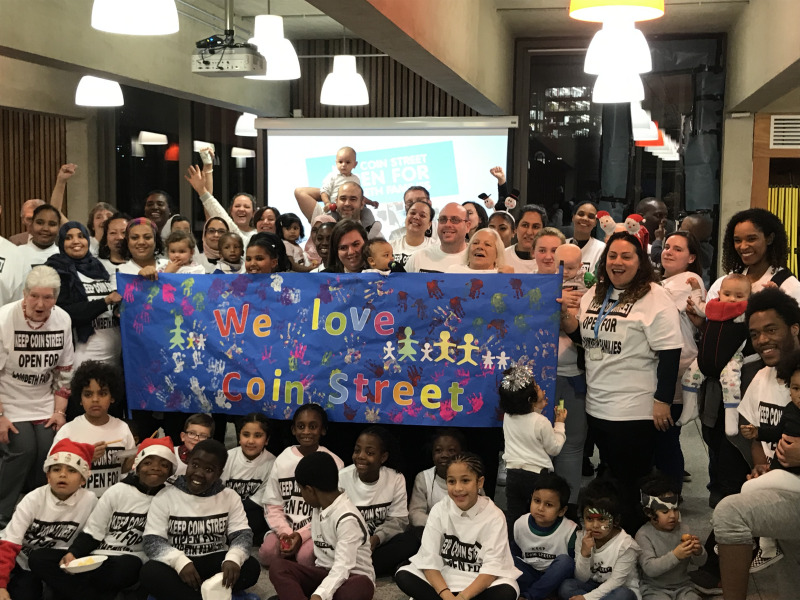 Last December Lambeth Council launched a consultation on plans to cut the number of children's centres across the borough from 23 to 18, including the withdrawal of funding from the centre run by Coin Street Community Builders (CSCB).

Coin Street currently receives around Ł124,000 a year from Lambeth for its children's centre – a figure that has more than halved since 2011.

Coin Street's children's centre is unusual because – being located on the borough boundary – it receives funds from both Lambeth and Southwark councils, and also benefits from funds raised through CSCB's other activities.

As a result, local families are able to enjoy a much wider range of services than would be possible if the centre relied on funding from Lambeth alone.

"We believe that the Coin Street family and children's centre provides strong value for money as a partner to Lambeth Council," said David Hopkins, Coin Street's director of community.

"We have consistently increased the amount we invest as an organisation in children's centre provision year on year as local authority funding has diminished.

"We hope we and our families will be able to convince Lambeth to review their proposals to ensure we are able to continue to provide families and children – including those most at risk – with the best start in life."

If the council goes ahead with the plans as currently proposed, Waterloo families on the Lambeth side of the border would have to travel to the Ethelred Children's Centre in SE11, more than 20 minutes' walk from Stamford Street.

This would create the strange situation where Southwark families would be able to use the services at Coin Street on the same basis as at present, even though the centre is situated in Lambeth.

At present, around 600 families make use of the children's centre, with around half from each of the two boroughs.

The children's centre also helps to enable the casework and advocacy that Coin Street staff are able to do with some of the most vulnerable SE1 families.

Writing in the Guardian this week, Lambeth leader-elect Cllr Jack Hopkins said: "Despite keeping 23 children's centres open since 2010, at a time when Tory cuts have closed hundreds across the country, in 2018 the government cut the dedicated schools grant, which helps to fund our children's centres, by Ł1.4 million.

"As a council, we have protected children's centres from that cut this year – but now we have no choice, with further cuts in all services imposed by the Tories, except to consult on plans that will keep 18 children's centres in the borough."

Bishop's ward Labour councillors Kevin Craig and Jennifer Mosley visited the centre before Christmas and heard first hand from parents and families how much they value the current service.

The council's proposals have also been criticised by trades unions.

Ruth Cashman, Lambeth UNISON branch secretary, said: "These proposals follow cuts only two years ago which already pushed our centres to the brink.

"Any closures or further cuts would be a complete failure by Lambeth Council to address the needs of the most vulnerable children and families in our borough."

A decision is due to be made by the borough's cabinet on 1 April and, if approved, the new arrangements would start in September this year.