"There is a dreadful housing shortage in Southwark which brings misery to thousands of families," Val Shawcross told a gathering at Bermondsey Village Hall last week. 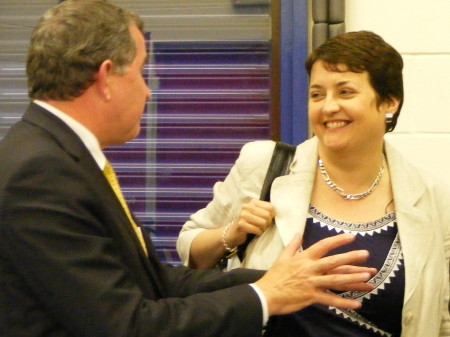 The Labour member of the London Assembly representing Southwark & Lambeth was speaking at a Co-operative Party meeting called to discuss how to build social housing in the credit crunch.

"The population of Southwark is growing. As one of the most deprived boroughs in England people are more likely to need social homes. Increasingly young people are being forced to rent in the privite sector but the typical salary is less than Ł15,000."

"People are unable to put down roots and children have disrupted education."

She attacked Southwark's housing repair service which she claimed had deteriated in recent years.

"Southwark, as a relatively small council, has taken on many regeneration projects," observed Val Shawcross who wondered if it had the capacity to manage its problems. "Section 106 agreements that have provided so many opportunities to bring forward social housing are diminishing."

"I do feel that social housing is almost in meltdown and there has to be some self help solutions for communities to get together and not just to build projects but also look for more self management options. It is in those co-operative solutions that people get maximum agency control."

David Rodgers, executive director of Marshalsea Road based CDS Co-operatives managing 3,000 homes, said that he had had written the Leathermarket JMB management agreement.

"What people need are decent quality affordable homes where the repairs are done, the roof does not leak and where they have some sense of control over the service that they receive and the co-operative movement is by far the best way."

He asked the audience to think about housing in a different way. "There is a middle ground," claimed David Rodgers who said that 'mutual home ownership' had support across parties. He called for a local community land trust.