London mayor Sadiq Khan has conceded that passengers should have been given more notice of the 50 per cent cut to the RV1 bus service, and says the route will be reviewed in the summer. Better Bankside has warned that the cut could harm local businesses. 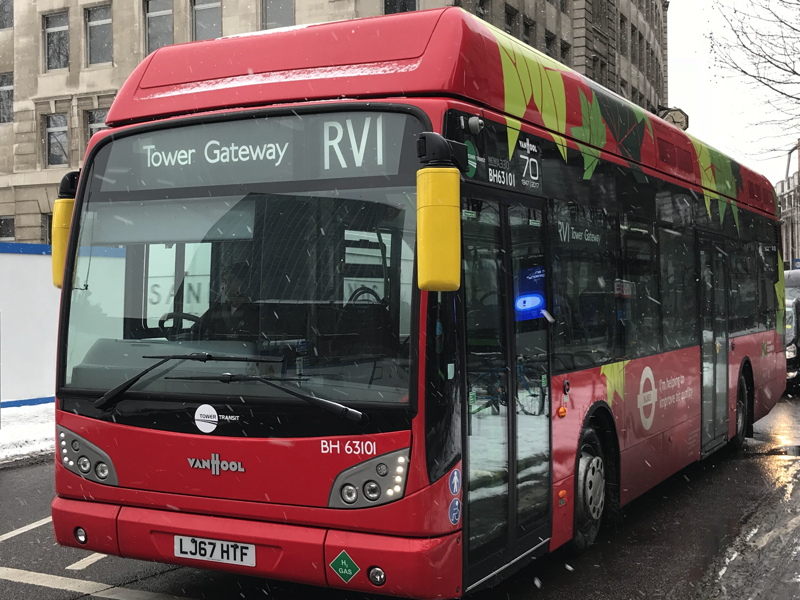 One of the two new Van Hool hydrogen buses recently acquired for the RV1 by TfL at a cost of around £1 million, including some EU funding

Mr Khan was responding to two questions about the recent 50 per cent cut to the RV1 tabled by Liberal Democrat London Assembly member Caroline Pidgeon.

The service on the RV1 was reduced to just three buses an hour from Saturday 10 February.

"Transport for London (TfL) emailed customers in advance to ensure they were aware of the change in frequency," said the Mayor.

"TfL is only required to formally consult on changes to bus services when it is planning to alter the routing, not the frequency as in the case of the RV1.

"I recognise that TfL should have given customers and stakeholders more information in advance, and I have asked TfL to improve how it communicates changes of this nature.

Ms Pidgeon also quizzed the Mayor about what research TfL had carried out on the effect of long-term diversions on the RV1 passenger numbers.

"Research carried out by TfL shows that weekday use of the RV1 has fallen by nearly half in the last two years," said Mr Khan.

"Weekend use also fell by 40 per cent in the same period. By comparison, demand for three other routes (the 47, 381 and 343) that normally serve Tooley Street dropped by nearly 20 per cent on weekdays and just over 15 per cent at weekends.

"Based on these figures, TfL is confident three buses an hour provide sufficient capacity to meet any anticipated increase in the level of demand once Tooley Street re-opens, particularly given the number of other routes that run parallel to sections of the RV1.

"My Deputy Mayor for Transport [Val Shawcross] has committed to reviewing this route in six months time to ensure the revised timetable provides sufficient capacity."

Caroline Pidgeon AM told the SE1 website: "I welcome the Mayor at least admitting that TfL should have given customers far more notice of the savage cuts to this bus service, however the bigger issue is why the cuts are even being made.

"Quoting recent usage statistics is meaningless as everyone knows that use of the bus route has been suppressed due to roadworks not just on Tooley Street, but also on Upper Ground and of course the closure of Tower Bridge in 2016.

"Given the new developments in the area as well, the Mayor should reverse his cuts to the RV1 bus service."

Business improvement district Better Bankside this week joined the chorus of criticism of TfL over the cuts to the RV1.

In a statement published on its website, Better Bankside said "Without this essential bus service, Bankside will become less accessible and attractive, directly impacting local business and the local economy. The reduction in service also does not take into consideration the mobility and accessibility of residents, staff, students, visitors and those accessing the local hospital.

"The decision contradicts the aims and objectives as set out in the Mayor's Transport Strategy (MTS) which directly addresses London's poor air quality.

"The RV1 is a hydrogen-fueled bus and it has been noted that in three instances the new service has been replaced with a diesel-fueled bus.

"The Bankside area has been designated a 'pollution hot-spot' by the Greater London Authority, therefore a reduction in hydrogen-fueled buses will only exacerbate local pollution levels."