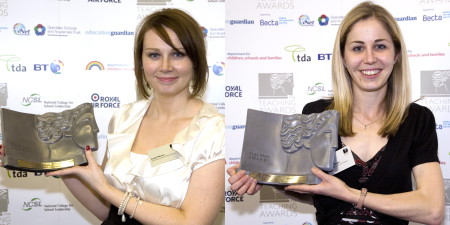 The awards were presented this week at a ceremony hosted by Riz Lateef of BBC London News.

Two of the 12 'Plato' awards for London teachers were given to staff at Southwark schools.

Carly Moran, who teaches English and Media at St Saviour's and St Olave's School in New Kent Road, won the SSAT Award for Outstanding New Teacher of the Year in London.

She was nominated for the award by a former pupil who credits the teacher with improving her GCSE grades after the class had been taught by a succession of supply teachers: "She rescued us. She is a complete saviour."

Carly, who previously worked as a complaints manager for the National Health Service, joined the school after impressing senior staff as a trainee during her teaching practice and is now a popular member of staff.

"Her affable manner and excellent sense of humour enable her to get on with a whole range of staff. She is in all respects a team-player," said one colleague.

Victoria Panayi, a Modern Languages teacher at Notre Dame RC Girls' School in St George's Road, was named Teacher of the Year in a Secondary School in London.

A colleague said: "I never known a student who has not spoken highly of her."

As a form tutor, she has nurtured her current group from Year 7 to 11, and is extremely proud that the head girl, one of the two deputy head girls and 3 other members of the student leadership team come from her tutor group.

The judges said: "We have not come across a teacher of this breadth and calibre".

Richard Owens of St Saviour's and St Olave's received a distinction in the same category.

Dr Irene Bishop, headteacher of St Saviour's and St Olave's, received a commendation in the Royal Air Force Award for Headteacher of the Year in a Secondary School