Oyster card holders can now buy tickets for Thames Clippers boat services from piers including Waterloo, Bankside and London Bridge using their pay as you go balance - and get a 10 per cent discount on the cash fare. 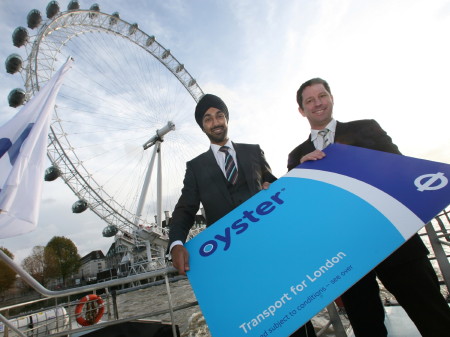 The Mayor of London confirmed on Monday that Oyster pay as you go can be used on Thames Clippers river services with immediate effect.

"Travelling on the Thames is one of the great pleasures of London and I believe Oysterisation of the river will encourage more people to enjoy what must be one of the most reliable and relaxing commutes in the country," says Boris Johnson.

"Our aim is for the Thames to become an integral part of London's transport network, which is why we're also working to provide clearer signage to the piers and services that are available, in order to make using the river much easier for Londoners and visitors to the capital."

To use Oyster pay as you go on Thames Clippers, passengers should place their Oyster card on the ticket inspector's hand held reader, confirm which discount applies and then the fare will be taken from their pay as you go balance.

However, travel on Thames Clippers does not count towards the daily Oyster price cap, so some passengers may find it cheaper to buy a paper One Day Travelcard in order to obtain the better discount.

The Tate Boat from Bankside Pier (for Tate Modern) to Millbank Pier (for Tate Britain) now accepts Oyster pay as you go, as does the ferry from the Hilton hotel at Rotherhithe to Canary Wharf.

Passengers on the O2 Express non-stop service from Waterloo Millennium Pier to the QEII Pier at North Greenwich can pay for their ticket using Oyster pay as you go but no discount is given.

Passengers with a Travelcard loaded onto their Oyster card are eligible for the existing discount of a third off their ticket price, which can then be paid for using pay as you go credit.

Today's announcement follows the signing of the Mayor's River Concordat in April this year, which sets the scene for closer working between London's pier owners, boat operators, borough councils and Transport for London to improve ticketing, piers and passenger information.

"I look forward to the continuing support under the Mayor's concordat to fully integrate Thames Clippers into the TfL network," says Sean Collins, managing director of Thames Clippers.

"Last year we carried 2.7 million passengers, a near 400 per cent increase in passenger numbers over a two year period as a result of our investment in 6 new fast ferries."

• Oyster pay as you go will be available on National Rail services in Greater London from the New Year.