Standing ovation for Grace Idowu at ‘Enough is Enough’ awards

Grace Idowu - whose son David was fatally injured on the Tabard Gardens Estate in 2008 - received a standing ovation when she picked up an award at Safer Southwark Partnership's Enough is Enough event. 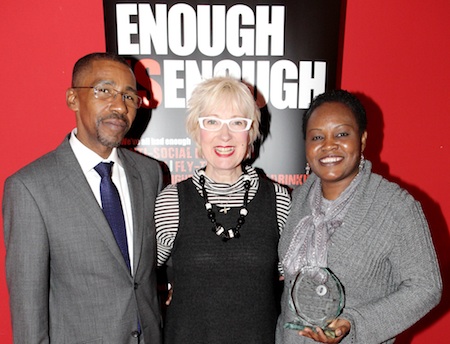 Grace was introduced at the awards ceremony by Devon Hanson, principal of Walworth Academy, who described David Idowu as "a very bright young man" who was "a very valued member indeed" of the school community.

The local teenager had just walked a few yards from his home to play in Tabard Gardens when he was stabbed on 17 June 2008. He died in hospital on 7 July 2008. In January 2009 Elijah Dayoni, 16, was sentenced to life imprisonment for murder.

Hanson praised Grace Idowu's courage, determination and faith in the wake of her son's murder. She has given talks in schools and campaigned tirelessly for an end to youth violence and gang culture.

Grace Idowu received the 'Community Members Taking a Stand' award from the host of the ceremony, Jenny Eclair.

Accepting the award, Grace said she was "lost for words". She dedicated her award to all the young people who have lost their lives through violence in Southwark and spoke of her pride in the local young people who were also receiving awards for their positive work in the borough.

As well as the Southwark award, Grace has this week been named 'compassionate mum of the year' in the national Tesco Magazine awards.

She spoke with realism, humour and affection about life in Southwark: "I couldn't think of living somewhere where I couldn't catch the 176 bus," she said.

Enough is Enough is Southwark's campaign to raise awareness about antisocial behaviour and the enforcement action taken against those who cause damage to the environment and the borough's communities.

Also honoured for Outstanding Achievement was Natalie Tomlinson who works at the Globe Academy mentoring and advising young people.

The group award for Community Members Taking a Stand was retained by the Youth Mediators who help to resolve conflicts. Based at Bacon's College in Rotherhithe, they have received financial backing from SE1 businesses via Team London Bridge's Building Bridges fund.