Kate Hoey has praised the role of the churches and trade unions in Zimbabwe during an address at Southwark Cathedral. 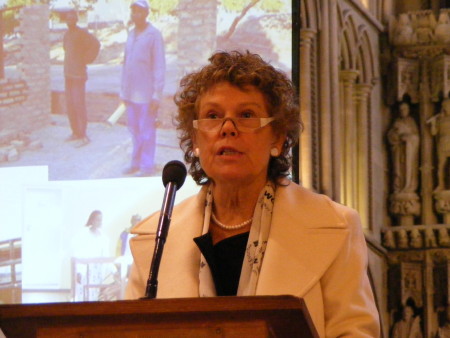 "What was so striking is that it was the ordinary church members of Bulawayo who had swung into action to help those people whilst the Red Cross and other agencies took much longer. It was the church which was in the forefront.

"On another visit to Zimbabwe I called on Lucia Matibenga at her home in Gwelo when she was recovering from a savage beating from the secret police because as a vice-president of the Zimbabwe Congress of Trade Unions she had led a protest on the streets of Harare."

Kate Hoey wore a white silk scarf decorated with the slogan 'Enough is Enough' and the letters WOZA for 'women of Zimbabwe arise' which had been presented to her by women in Bulawayo.

"I am so proud of the fact that wherever I went in Zimbabwe I saw women leading the struggle," she said.

"The women of Zimbabwe, when we get a peaceful democracy, are going to be so important to bringing the country back to what it was before."

The MP was introduced by Canon Bruce Saunders who said that the lunch event was definitely not part of President Mugabe's birthday celebrations.

Earlier in the day Fr James Mukunga from Zimbabwe, currently a member of the cathedral clergy team, was celebrant at the Sunday Choral Eucharist.

As chair of the All-Party Parliamentary Group on Zimbabwe, Kate Hoey will this week be taking part in talks about Zimbabwe with the South African foreign minister.

Masvingo Link Day marked the launch of the cathedral's partnership with the Anglican Diocese of Masvingo in Zimbabwe. The Cathedral Council has pledged to raise £10,000 a year to support clergy stipends, theological training, church building and healthcare projects.