A mosaic has been unveiled at the Garden Museum celebrating the life of the campaigner who fought to save the historic building from demolition over 30 years ago. 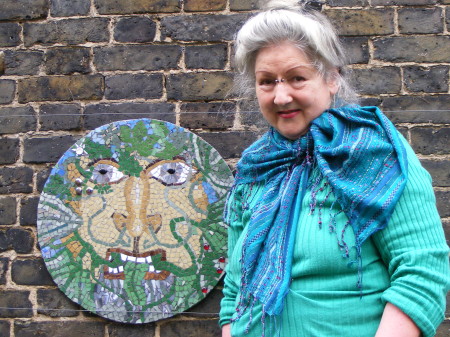 Rosemary Nicholson led the campaign in 1977 to save St Mary-at-Lambeth church on Lambeth Palace Road and founded the Museum of Garden History, which later became the Garden Museum. Rosemary died in 2004 and her goddaughter, Juliet Webster, has created the mosaic entitled 'The Green Man' in her honour.

"The church was going to be torn down and Rosemary spent years of her time and energy saving this beautiful place," said Juliet. "Being my godmother, I decided I would donate the Green Man to the museum to commemorate her."

The mosaic is located in the back garden of the museum and Juliet hopes visitors will enjoy both the design and the surroundings.

"It's called the Green Man because it features the spirit of nature lurking amongst the green foliage and I hope it will bring pleasure to visitors," said Juliet who learnt the art of mosaic-making at Morley College.

The church of St Mary-at-Lambeth was founded around 1062 and the grounds hold an estimated 26,000 burials, including six Archbishops of Canterbury and the tomb of Captain William Bligh of the Bounty who spent his last years in Lambeth.

The interior of the building was redesigned in 2008 to create a contemporary space and the museum's collection holds more than 9,000 objects relating to gardening, including ceramics from several hundred years ago.