Lambeth Council has selected Atkins as the winner of a contest to design a new look for Lower Marsh in Waterloo. 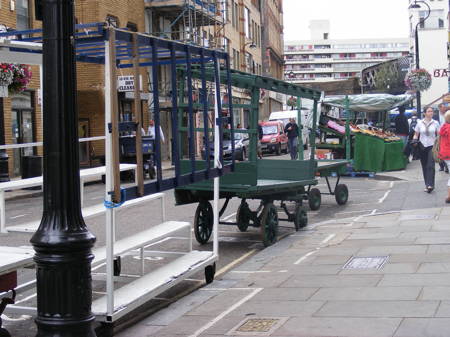 It is more than a year since the council launched the design contest to find a firm to lead the physical regeneration of the declining street market.

A public exhibition of the four shortlisted proposals – from Atkins, BDP, Hawkins Brown and Urban Initiatives – was held in March at the offices of Islamic Relief.

Now Lambeth is on the verge of confirming Atkins as the winning bidder of the £250,000 design contract to see the project through to completion.

The council's decision was published last week and is currently subject to a 10-day cooling-off period before a contract can be signed.

Atkins' winning submission, which puts the capital cost of the works at £3.7 million, includes proposals to restrict vehicle access to Lower Marsh during the day and a requirement for market traders to park their vans away from the street.

The street would be resurfaced and a clutter-free shared space created.

The current 77 pitches for market stalls (only 10-12 of which are regularly occupied) would be reduced to 46 in number but expanded in size. Bollards providing power and water to the stalls would also be installed.

The firm also proposes to reorganise the junction of Baylis Road, Lower Marsh and Spur Road to make it easier for pedestrians to reach the market area from Waterloo Road.

Another element of the Atkins proposal includes changes to the Westminster Bridge Road end of Lower Marsh, moving the pedestrian crossing to the north side and relocating the southbound bus stop away from the dank railway bridge.

• Find out more about the scheme at www.lambeth.gov.uk/lowermarsh