'Fireworks-style' lighting has been installed in the Clink Street tunnel which forms part of the Thames Path. 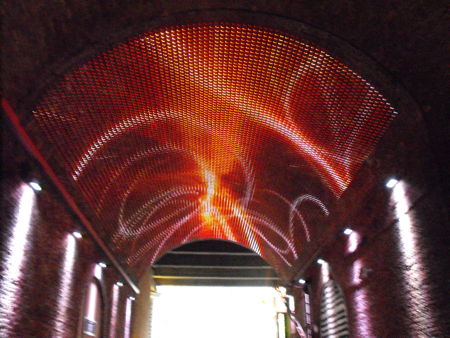 The new lighting on the the roof of the long Cannon Street Railway tunnel, which runs between Vinopolis and the Clink Prison Museum, was officially inaugurated on Wednesday evening.

"It's a busy and bustling area where we see offices, lots of people living here and many many tourists come to visit our tourist attractions," said cabinet member for regeneration Cllr Fiona Colley at a reception held in Vinopolis.

"Our administration's vision for this area is to really see that regeneration continue, to see it spread southwards across the borough and to deliver real job opportunities for local people."

Cathedrals Ward councillor Adele Morris said that she was really pleased to see another lighting installation which she thought must be the most ambitious.

"We have a very established community already in this part of the borough and it is good that it's not just the developers that will benefit but also local residents.

"I am really proud to stand here and open it. This will make a huge difference."

Planning permission was granted in February and the system was installed during August.

Jo Thorn of Halo Lighting said that the bricks were covered by a fexible steel mesh holding 9,600 nodes with 50,000 cable ties.

"This is the only installation of its kind in the UK."

The 'fireworks' display will operate daily between 7.30am and 10.30pm on a 48-hour schedule with variable intervals between the firework showers.

The display has been designed to correspond with the peaks and troughs of the pedestrian flow under the bridge.

The quiet phases will be marked with a twinkling star effect and, when the area becomes busier, the firework effect will build up momentum reaching its most striking display in times of increased activity.

Vinopolis facilities manager Justin Morley said: "We believe this to be outstanding for the area. I think many had seen the dank Clink Street arch as it was before."

The scheme is funded by a section 106 planning agreement with Bankside Mix and match funding by Southwark Council's Greener, Cleaner, Safer programme.

Some Clink Street residents had opposed the lighting fearing that the 'firework displays' would attract noisy late night crowds.