A Barclays Cycle Hire docking station with space for 126 bicycles has opened at Waterloo Station. 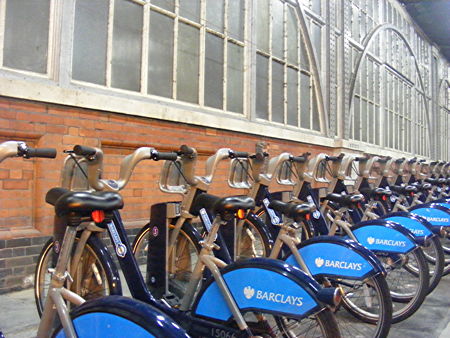 Commuters arriving at Waterloo Station are now able to pick up Barclays Cycle Hire bikes from a 'super' docking station on the Upper Taxi Road.

The 126-space docking station is unveiled on the day that TfL announced that over two million journeys have now been made using the iconic blue bikes.

The new docking station is the first to be opened within a mainline railway station.

The docking points can be found on the Upper Taxi Road between the recently opened double-decker bicycle park and Victory Arch.

"There is an incredible demand for Barclays Cycle Hire bikes at Waterloo and we have responded to this by ensuring that people using this landmark railway station can now pick up or drop off a bike at our first super-size docking station," says Kulveer Ranger, the Mayor of London's transport advisor.

"With over two million journeys made in just under five months we are confident this expanded docking station will be of great benefit to the thousands of Londoners and visitors using the bikes."

Since the launch of the Barclays Cycle Hire scheme in July Serco – who operate the bicycle service for TfL – have provided extra staff at docking stations around Waterloo to add more bicycles to the system in the morning rush hour and remove bikes in the evening.

This extra service will cease with the advent of the new docking station.

Network Rail's Mike Goggin says that the company is working with Transport for London to explore the possibility of similar docking stations at other mainline railway stations.