Developer CLS Holdings has held a public exhibition of initial concepts for an elevated 'Linear Walk' for pedestrians and cyclists above the Vauxhall Cross interchange, providing a new link from Nine Elms to the southern end of Albert Embankment. 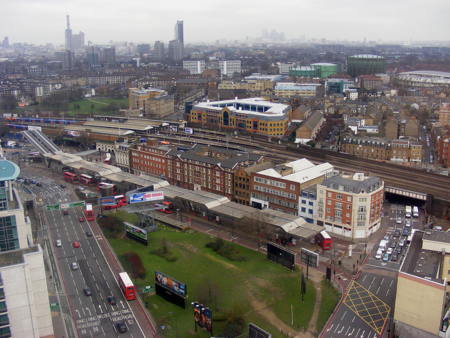 Vauxhall Bus Station seen from the 19th floor of Market Towers. The proposed Linear Walk would separate pedestrians and cyclists from motor traffic at this key interchange

CLS, which is based in Bondway and owns a lot of property locally, wants to build a series of high-rise buildings at the corner of Bondway and Parry Street.

The Vauxhall Square development would include homes, offices, a hotel, cinema and student accommodation.

The developer is holding a competition to find an architect to design a 'Linear Walk' which would stretch from Nine Elms Lane and Wandsworth Road in SW8 to the southern end of Albert Embankment in SE1, outside the MI6 headquarters.

The elevated walkway, which would replace the distinctive 'ski jump' bus station which opened just six years ago, has been compared to schemes such as the High Line in New York.

CLS claims that a solution to the conflict between motor vehicles, pedestrians and cyclists at Vauxhall Cross is a prerequisite for the regeneration of the area.

Five architectural practices have been shortlisted in the competition to find a designer for the Vauxhall Linear Walk, including London Eye creators Marks Barfield. Initial designs will be published next month.

CLS says that it hopes to deliver the Vauxhall Linear Walk at no cost to the public, though it will almost certainly argue that such an audacious proposal to change the public realm should lead to a lower requirement for affordable housing than would otherwise be expected.

The proposal comes at a time when high-level walkways and underpasses have fallen out of favour. Pedestrians and motor vehicles are increasing expected to coexist at the same level, such as at Elephant & Castle where subways have been replaced with surface-level crossings. The network of high-level walkways at the South Bank is also less extensive than it once was.

• Find out more about the Vauxhall Linear Walk at www.vauxhallsquare.co.uk

The Vauxhall Square and Vauxhall Linear Walk scheme has been made public in the same week that communities secretary Eric Pickles vetoed a proposal for a 42-storey building known as the Octave Tower which had been proposed for the adjacent site to the east of Bondway.