Confirmation of the news - first revealed on this website in February - that the Elephant & Castle Shopping Centre will be refurbished rather than demolished is expected in the next few days. 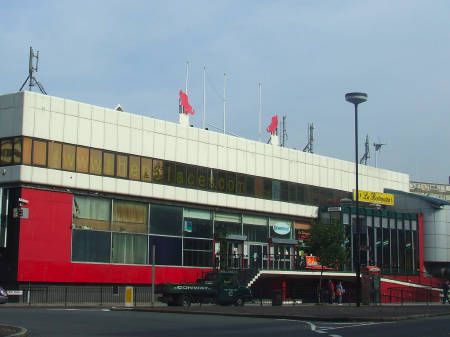 Southwark Council leader Peter John came close to admitting that plans to demolish the centre were off the agenda when he was questioned by Chaucer ward councillor Tim McNally at council assembly on Wednesday night.

"Residents in our part of the borough for a long time have been wishing for a brand new shopping centre at the Elephant & Castle," said Cllr McNally.

"And then we hear that they are just going to paint it blue in the summer."

We first revealed St Modwen's intention to retain the existing building back in February when plans for refurbishment were included in a presentation to investors in the owners of the shopping centre.

On Wednesday night Cllr McNally asked Cllr John what confidence local residents could have that a brand new shopping centre will be provided at the Elephant.

"I can give him the confidence that we are absolutely committed to see the shopping centre improved at Elephant & Castle," replied Cllr John.

"We've had some really constructive meetings with Lend Lease and St Modwen in the last few weeks.

"As he will well know, we are not in a good period for retail development – that's what all the developers are telling us.

"We have the potential for something which – to all intents and purposes – is a brand new shopping facilty for Elephant & Castle at a much earlier stage than we were looking at just nine months ago."

The council leader says that St Modwen has "some really exciting proposals to create a shopping centre that is unrecognisable to what we have there, which enhances the area and I think will be a real driver for the regeneration".

He added: "I know that people right across Southwark and right across London will not believe that there has been regeneration at Elephant & Castle whilst the current shopping centre exists in its current fashion and current shape with the Elephant sitting on top and no real change."

The Labour leader's enthusiasm for the refurbishment proposal marks a significant change in council policy; previously there had been cross-party consensus that demolition of the shopping centre was a prerequisite for the Elephant regeneration programme.

In November 2009, as leader of the opposition, Cllr John told the SE1 website: "Demolishing the shopping centre … is absolutely central to starting a new chapter for Elephant & Castle".