Councillors have voted to approve a 22-storey tower on Newington Causeway despite strong objections from the Ministry of Sound which fears that an influx of new neighbours will put its licence at risk. 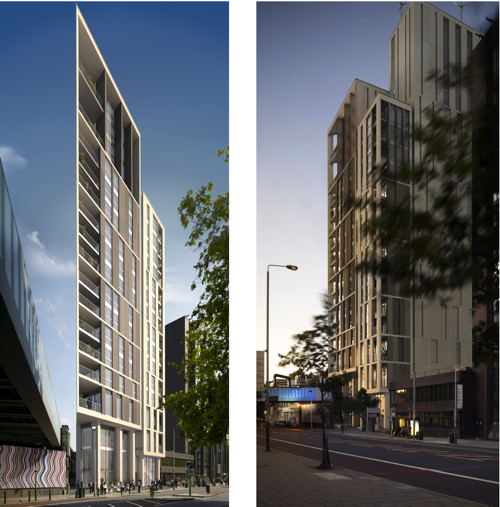 We first reported on plans for the Panter Hudspith-designed tower in September 2009. Obections from the nearby nightclub meant that the planning application was pulled from the agenda of a December 2009 planning committee meeting at short notice.

18 months later the scheme was presented to councillors at Southwark Town Hall on Tuesday night.

The tower – to be situated north of the Salvation Army building and south of the railway bridge – will include 38 homes with 11 flats designated for shared-ownership affordable housing. It will feature a cafe at ground level and offices on the lower floors.

Presenting the planning application, Gary Rice – the council's head of development management – told the committee that the new tower would "contribute positively to the emerging cluster of tall buildings at Elephant & Castle".

Objections to the application were led by Ministry of Sound chief executive Lohan Presencer who was accompanied by staff from the club holding placards.

He told the committee that Ministry of Sound has been "a vibrant part of Elephant & Castle for 20 years" and that the company supported the regeneration of the area, but he claimed that the tower is "the wrong proposal in the wrong place".

Mr Presencer warned that if new residents objected to noise from the club, it could cause "irreparable damage" to the Ministry of Sound's business and put hundreds of jobs at risk.

He said that the new development would "not deliver a satisfactory noise environment for its future residents".

When Cllr Nick Stanton put it to him that residents moving in to new flats close to the Ministry of Sound could hardly be surprised by the noise, Mr Presencer said that the law does not provide any such defence against those who have come to a nusiance.

"The likelihood of complaints is very high," he said.

The club boss was unapologetic about the crowd noise that is made by patrons of the Ministry of Sound.

"If you are there on a Wednesday when we kick 1,200 students out at 3am … fairly drunk, let's face it … it's pretty disruptive and that noise goes on for 45 minutes."

Architect Simon Hudspith told the committee that his building would help to define a threshold to the Elephant & Castle area.

Paul Gray, noise consultant from the Equus Partnership, set out the reasons why the applicants did not consider the noise from Ministry of Sound to be a problem. He claimed that the club is some distance away from the proposed development, the area is noisy anyway and the degree of sound insulation built into the scheme's design would, together, serve to mitigate the effects of any noise from the club and its patrons.

"The operation of the Ministry of Sound is a fundamental feature of the character of the area, he said."

Ward councillor Tim McNally addressed the committee in support of the planning application.

He explained that the regeneration of Elephant & Castle had stalled because of the economic downturn.

"It is imperative that it is restarted and is seen to be restarted," he said, adding that the next phase of regeneration will finally see areas to the north of the Elephant, such as Newington Causeway, obtaining some of the benefits of development.

Cllr McNally said that it was right that Ministry of Sound's concerns had been given serious consideration, but that studies had clearly concluded that "the club and the new homes can happily coexist".

He said that the question of new residents objecting to an existing noisy activity in the neighbourhood was a matter for national government and that Simon Hughes MP had confirmed that "legislation is being brought forward to stop people moving in and then complaining about existing uses".

Questioned about this by committee member Cllr Neil Coyle, Cllr McNally added: "Simon is a passionate supporter of the Ministry of Sound."

He explained that the Bermondsey & Old Southwark MP had felt strongly for some time about new residents complaining about noise from existing industry or activity.

"Finally he is in a position where he can actually bring something like this forward," said Cllr McNally.

To laughter from Labour committee members and the public gallery, he added: "I believe this is the sort of pledge you will actually see him delivering on."

Cllr Jeff Hook asked Cllr McNally what he would say to one of his future constituents who moved into the new development and then complained to him about noise from the club.

"My answer would be a two-word answer with the word 'off' in it somewhere," he said.

He added: "I think if you move in on top of the Ministry of Sound you should expect a bit of noise."

The committee voted 4-3 in favour of granting planning permission for the scheme.

Cllr Nick Stanton said he believed the noise issue was a red herring but he opposed the scheme because it was too tall and lacked any social rented housing. Cllr Robin Crookshank Hilton said she had overcome her initial reservations about the design wasn't convinced by the information about noise that the committee had been shown and Cllr Neil Coyle also felt unable to support the scheme.

Tuesday night's attempt by Ministry of Sound to block the development was only the first round in a campaign that is likely to be stepped up when councillors finally consider the proposed 41-storey Eileen House development which is much closer to the club.

A 'save our club' petition against the Eileen House scheme now has nearly 12,000 signatures.