The developers of a luxury housing scheme next to Tate Modern have been allowed to waive their obligation to include affordable housing amongst the exclusive riverside apartments. 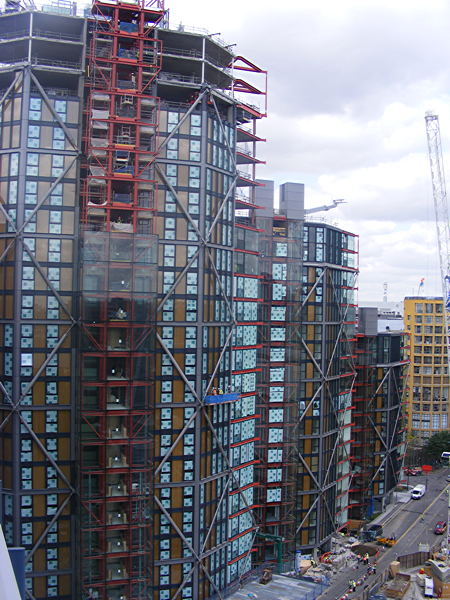 Neo Bankside: according to the developers, property sales of more than £140 million have already been made

When the Neo Bankside planning application was approved by councillors in 2007 the developer was able to persuade the council to allow it to meet its social rented housing obligations off-site in cheaper areas but 34 intermediate affordable (shared ownership) homes were to be provided alongside the luxury apartments.

Neo Bankside is designed by Rogers Stirk Harbour and Partners and is being developed by GC Bankside, a joint venture between Native Land and Grosvenor.

The developer and the council have now decided that due to high property values and high service charges these shared ownership homes are unlikely to be affordable.

GC Bankside applied to Southwark Council to vary the planning permission and replace the shared ownership homes with a £9 million cash payment to the council for housing elsewhere in the borough.

The changes mean that the number of homes for market sale at Neo Bankside will go up from 199 to 217 but the overall number of homes will fall from 233. Block E, which is nearest to Southwark Street, will be turned into offices rather than homes as originally planned.

The report presented to Southwark's planning committee on Tuesday night explained that the expected sale value of the homes would be between £440,000 for a one-bed flat and £742,000 for a two-bed flat.

Under a shared ownership arrangement, a prospective resident wanting to purchase a minimum 25 per cent equity share would need to have an income between £55,000 and £93,000 a year.

This compares to Southwark's target income group for shared ownership homes in the borough which is in the region of £29,000-£35,000 a year.

Councillors were also told that the high service charges for Neo Bankside apartments (£3,400-£4,000 a year for a one-bedroom flat and up to £5,750 for a two-bedroom flat) would also breach guidelines for affordable housing.

The council estimates that it can use the £9 million to build 44 homes elsewhere in the borough to replace the 34 homes that would have been provided at Neo Bankside.

The developer had also applied to vary the geographic area in which it can built the social rented housing required under the terms of its legal agreement with the council to include the Elephant & Castle opportunity area, subject to 25 per cent of the homes being built within Borough & Bankside.

Andrew Richardson, coordinator of Bankside Residents' Forum, addressed the committee to warn that the deal set a worrying precedent for future planning applications, as developers in the Bankside area would rather pay a lump sum to the council than build affordable homes on expensive land.

He also told the committee that the deal flew in the face of the borough's development plan.

"It makes it sound as if it's negotiable for cash once a development is virtually complete," he said.

Tim Wood, chairman of Bankside Open Spaces Trust, echoed Andrew Richardson's remarks.
"There is a major worry that the floodgates will open after this decision," he said, recalling the recent decision by the planning committee to approve an in-lieu payment for affordable housing at the Berkeley Homes One Tower Bridge development.

"I find that very difficult. It's a central plank of [Southwark planning policy] to provide a mixed and balanced community."

Responding to questions from the committee, Andrew Richardson said: "It's about making sure we have the housing stock to serve the needs of residents, especially so we avoid the situation where we are dependent on market values and people selling properties in Singapore or some very swanky hotel to people who have invested in Southwark as a commodity, rather than investing in our neighbourhoods and residents."

"I wouldn't want to set a precedent and I'd want to look at each case on a site-by-site basis," he said.

Neo Bankside development manager Dan Clarke reminded the committee that the developers had spent £22 million acquiring the 'Tate Tower' site across the road for public benefit.

He set out the history of the scheme: "We moved forward to construction in January 2009, a few months after the Lehman Brothers crash and after HBOS was taken over by Lloyds. That is significant because HBOS is the funding bank for the development."

Bringing the story up to date, he said: "Block A is now complete, block B should complete by the end of this month and blocks C and D will be complete early next year."

Explaining the rationale for the application before the committee, he said: "The on-site affordable [housing] is now unaffordable in comparison to the target groups as defined by Southwark Council.

"Because of that we have agreed a £9 million payment with officers in an open-book discussion which I can assure you represents a good deal for the council."

Mr Clarke told the committee that by changing the triggers for the occupation of the new Neo Bankside blocks linked to the completion of the social rented housing being built elsewhere (such as the old car park at Alice Street and the Whitstable Early Years Centre on Tower Bridge Road), the developers would be able to refinance the scheme.

"This will allow us to pay the £9 million within the next few months as opposed to leaving it to the end of the development process," he said.

"It also makes the bank much more relaxed about the whole thing and means we won't go into various defaults against our loans which would be expensive."

Under questioning from the committee about the elimination of on-site affordable housing, Mr Clarke said: "It's not the politically correct move and if we didn't have to do it we'd just get on with [the development]."

Asked about the high level of service charges for residents, he replied: "These buildings are incredibly expensive to operate. They are very expensive to clean, they have a 24 hour concierge etc.

"Most notably, the sinking charge for this type of building – which may need its cladding replaced in 40 years' time – is horrendous.

"All of these things are not necessarily wise, but that is the situation we find ourselves in."

Cathedrals ward councillor Adele Morris addressed the committee to demand safeguards to ensure that the £9 million is spent locally rather than being absorbed into borough-wide house-building budgets. "That £9 million: where is it going? That's what I want to know," she said.

She added: "We are losing out in Borough and Bankside; it's social cleansing and inequality, because our residents are being discriminated against because they are not being given the opportunity of new social housing."

In response to questions from the committee, Cllr Morris quoted a 2008 report which showed that almost 48 per cent of households in Borough & Bankside have incomes of less than £15,000 per annum.

The same report showed that 42 per cent of residents in the area could afford market housing, whilst 9 per cent would qualify for affordable intermediate housing (ie shared ownership) and the remaining 49 per cent could afford social housing.

The council's head of development management Gary Rice said that lessons have been learnt from the Neo Bankside scheme and in future the council would work harder to ensure that shared ownership proposals were workable. Developers providing affordable housing off-site would also be required to find sites up front.

Summing up, Cllr Neil Coyle said: "I'm desperately sad to be in this position when we would all prefer to have affordable housing on-site."

The committee agreed to vary the planning permission for the Neo Bankside development by four votes to two.