A garden in the ruins of Winchester Palace: fundraising appeal launched

A new project backed by Time Team's Tony Robinson hopes to improve the setting of the remains of Winchester Palace in Clink Street. 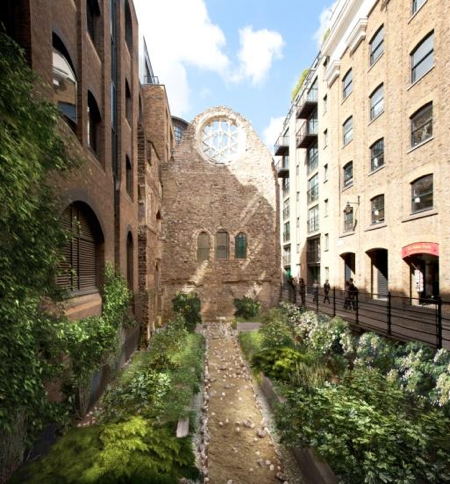 A visualisation of the proposed new garden

Following a proposal by Clink Street resident David Stephens, Bankside Open Spaces Trust has launched a fundraising appeal to improve the presentation and interpretation of the remains of the great hall of the Bishop of Winchester's London residence.

Winchester Palace is one of three scheduled ancient monuments in the Bankside area, along with the remains of the Globe and Rose playhouses.

In medieval times Southwark was part of the diocese of Winchester and the bishop carried political and economic influence.

The title came with this extensive and luxurious Southwark residence including direct river access, a private garden, a prison and freedom to set taxes and revenues for trades banned from the City within the ‘Liberty of the Clink’.

"Living close to the site of Winchester Palace and being aware of the millions of people who pass it on the Thames Path each year, I have been keen to do something about the gloomy, mossy pit and broken floodlights that visitors currently see as the setting for the remaining medieval gable wall and fine rose window of this ancient monument that is so important to Southwark's and London's local history," explains David Stephens.

The project includes the excavation of the cruciform foundation walls to reveal the undercroft of the palace that provided storage for the goods delivered by river to feed the huge palace staff.

A sunken garden in a series of oak planting boxes would help to show off the rose window and gable wall and the remnants of the palace hall's foundation walls whilst avoiding damage to them.

The third element of the project is a series of educational events to involve community groups, organisations and schools, working alongside archaeological experts and historians to develop an understanding of the site's rich heritage. These will include involvement in producing learning resources such as leaflets, interpretation boards on site and a 'Liberty of the Clink' mobile phone app.

The proposal has the backing of English Heritage which is the custodian of Winchester Palace.

The total cost of the project is expected to be Ł137,000 which will be raised from a variety of sources, including individual donations, grants from charitable trusts and section 106 contributions from local developers.

Supporters of the 'Winchester Palace Unveiled' project include Time Team presenter Tony Robinson, who said: "Clink Street is redolent with London history, not just because of the eponymous prison which, over half a millennium, incarcerated so many of its unfortunate citizens, but also because of the magnificent Winchester Palace next door, home of one of the most powerful men in Britain.

"The prison burnt down long ago, and little of the palace remains, except for one magnificent rose window and the walls surrounding it. To revitalise this window, and the history it exemplifies would be a task any Londoner should welcome, and I for one look forward to seeing this imaginative project come to fruition."

Bankside Open Spaces Trust has set up a JustTextGiving code so that individual Ł10 donations can be sent by texting BOST11 Ł10 to 70070.

If local companies would like to become a 'Winchester Palace Friend', they should contact Wendy Franks on [email protected].