Actor and broadcaster Tony Robinson has told the London SE1 website why he is backing a campaign to create a new garden in the ruins of Winchester Palace in Clink Street. 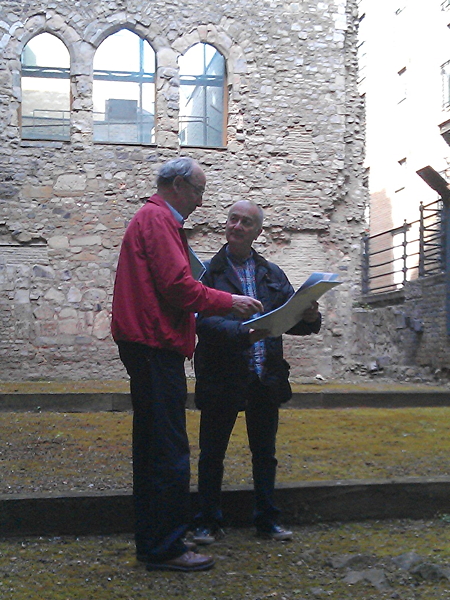 Last month we reported on the launch of a fundraising campaign for the garden and educational programme.

When Tony Robinson was in Bankside last week filming a new documentary for the History Channel, we caught up with him in Clink Street where he explained why he has lent his support to the campaign.

"I think this whole street is really important," he said.

"I remember it very clearly … when, quite frankly, it was a complete dump.

"You wouldn't have come here after dark, but now it's one of the most happening places in London with the prison, the Golden Hinde, the Rose, the Globe and of course the Winchester Palace.

"I suppose there is part of me that feels that Winchester Palace, which has got such a great story to tell, has really been overlooked.

"We go past it and we see this glorious window, there's this rather grey piece of grass and then we are on to the next tourist attraction.

"I want to see Winchester Palace right at the heart of what Clink Street is now rather than what it was a few hundred years ago."

Tony Robinson says it's vital that the Ł137,000 fundraising campaign draws support from a wide range of local residents and organisations.

"I think it's fundamentally important that this should be a community-driven enterprise," he said.

"If people don't buy into it, then the capital investment will be made but it will just wither and die.

"People need to nurture it, people need to look after it. They're only going to do that if they have the passion because they understand the history."

The proposals include educational programmes to help young people in Southwark learn more about the history on their doorstep.

"I think it's vitally important that everyone should have an understanding of their history," says Robinson.

"How do you know who you are if you don't know where you came from?

"To live in a wonderful place like this, which is just dripping with history from all ages, but not to realise that you are, seems to me to be a bit of a tragedy.

"It makes you a bit less of a person than if you understood the context in which you are living."