Rap artist Example joined staff from the Ministry of Sound in Tooley Street on Friday lunchtime to present a petition to Southwark Council calling on them to reject two proposed high-rise developments on Newington Causeway. 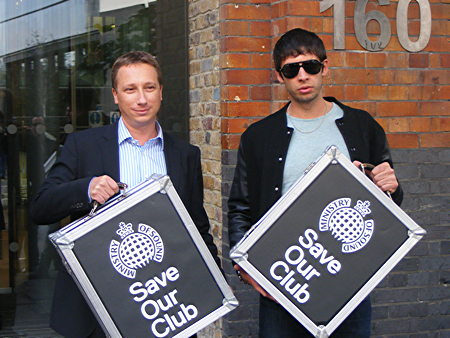 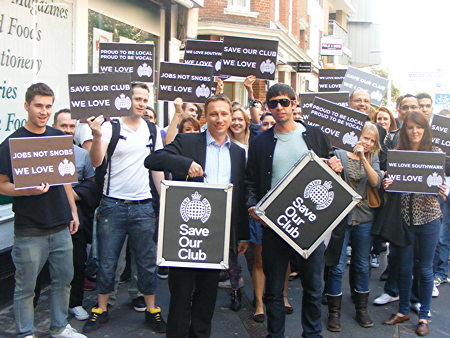 The delivery of the petition is the latest stage in a campaign by the club, founded 20 years ago in a former bus garage in Gaunt Street, which fears that its future is under threat if new flats are built nearby.

The two proposed developments are a 22-storey residential tower on the far side of Newington Causeway and a 41-storey tower on the site of Eileen House office block directly opposite the club.

Earlier this week Southwark Council's planning committee had been due to consider – for a second time – the application for the 22-storey tower.

However, the application was withdrawn from the meeting's agenda at the eleventh hour after an "administrative error" by council staff came to light which could have enabled the Ministry of Sound to argue that due process had not been followed.

Both planning applications are now due to be considered by councillors on 11 October.

The petition was started a year and a half ago and has now attracted 25,000 signatures from supporters of the club around the world.

The club argues that the council and the two developers (Neobrand and Oakmayne) have underestimated the noise and disturbance that music and crowds will cause for future residents of the new buildings.

New neighbours would be entitled to lodge complaints with the council about noise from the club and could seek to have its licence revoked or its hours reduced.

"Ministry of Sound has been here for 20 years, leading the way in dance music and becoming a cultural ambassador we should all be proud of," said Example (real name Elliot Gleave).

"Three generations of clubbers have had amazing times here. Why would anyone want to jeopardise that for the sake of luxury flats that do nothing for local people? These developers should know that we won't go quietly."

Ministry of Sound has also enlisted the proprietor of the Elephant & Castle Food & Wine shop at Metro Central Heights who will feature with Example in a poster campaign around Southwark to highlight the role the club plays in the wider local economy.

Southwark Council has reiterated that it recognises the club's concerns but is also keen to encourage new development on Newington Causeway as part of the Elephant & Castle regeneration.