Ministry of Sound and skyscraper flats can co-exist insists developer

The developer behind a proposed skyscraper at Elephant & Castle insists that his scheme will not threaten the future of the Ministry of Sound club. 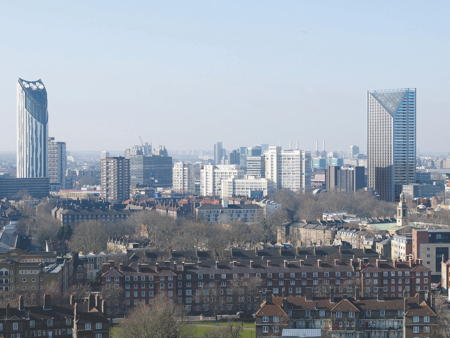 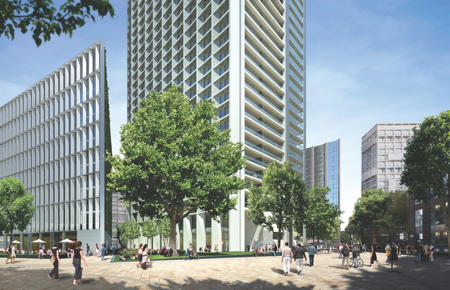 Oakmayne says that its development would provide Ł2.39 million worth of improvements to the public realm at the based of the proposed tower

Oakmayne's planning application for 335 homes in a 41-storey tower on the site of the Eileen House office block on Newington Causeway is due to be considered by Southwark's planning committee next week.

The tower, designed by Allies and Morrison, includes 80 shared-ownership units but no social rented homes.

The site of the proposed development is directly opposite the Ministry of Sound and the club's owners have argued that the influx of new neighbours will inevitably jeopardise the venue's licence.

The club has waged a high-profile publicity campaign and recently presented a 25,000-signature petition to Southwark Council. It has also complained to the Local Government Ombudsman about the council's handling of the planning applications.

Oakmayne says that noise tests have shown that the nightclub and the new homes can co-exist. The first 30 storeys of the tower will feature triple glazing to keep noise at bay.

"Countless noise tests have shown that the noise coming from the club itself will not create a nuisance and is not an issue," says Oakmayne chairman Christopher Allen.

"We can co-exist with the Ministry of Sound; in fact we'd like to embrace it as we recognise the mutual benefits of living in a vibrant and mixed community.

"We have had a number of ideas on how to work and co-exist together but sadly all our attempts over the years to work with the club's owners have been rebuffed.

"If our planning application is refused, it potentially threatens a swathe of regeneration, and could create a virtual residential no-go zone around the club.

"This would be a tragedy for local people who need housing, and for the area which desperately needs to feel the same benefits of regeneration which has helped transformed other areas of Southwark, like Bankside and Borough Market."

Oakmayne has previously developed a number of schemes around Borough Market, Clink Street and Bermondsey.

Christopher Allen added: "I am in no doubt that if the regeneration for this area which is proposed goes ahead, this side of the river could emulate the Left Bank of Paris; it will be young and vibrant and is surely something Ministry of Sound would want to be a part of.

"There are numerous nightclubs in London which co-exist in mixed residential areas. There is no reason why Ministry of Sound should not continue to operate successfully."

Oakmayne has enlisted Professor Bob Nobay, chair of the Metro Central Heights Residents Association, in support of its proposals for Eileen House.

"Eileen House will be a much overdue fillip to the area, offering a sustainable regeneration of the area and a much-needed integration with the London South Bank University campus, which contributes immensely to the progress of a large cross-section of aspiring students," said Professor Nobay.

Next week's planning committee meeting is also due to consider – for a second time – Neobrand's planning application for a smaller residential tower on the other side of Newington Causeway.

Councillors voted to approve the 22-storey tower in July but the application has been referred back to the committee after the Ministry of Sound argued that new evidence about noise levels from the club should be taken into account.