Simon Hughes MP and the Bishop of Southwark joined 200 people who slept out in the churchyard of Southwark Cathedral last Friday night to raise money for the Robes Project, a local homelessness charity. 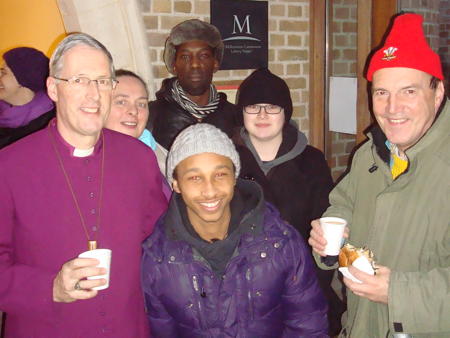 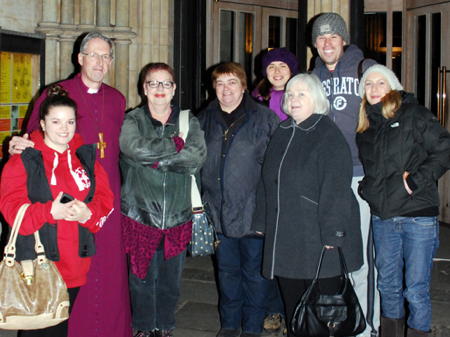 The Bishop of Southwark and Jo Brand with staff from Cathedral School (Photo: Heather Martin)

After a stand-up routine from supporter Jo Brand, the 200 volunteers – including 30 young people and a Bermondsey scout troop – were handed soup and bread rolls before braving the cold temperatures, wind and rain for the night.

Participants in the sleepout included staff from Better Bankside and Cathedral School. Cllr Poddy Clark, who represents Chaucer ward, had appealed for sponsorship from Southwark councillors of all parties at a council assembly meeting two days before the sleepout.

Fr Ray Andrews of St George the Martyr Church and the Archdeacon of Southwark, the Ven Michael Ipgrave, were among the local clergy who took part.

In total the Robes Project estimates the night raised £40,000 for its winter night shelter.

"The Robes Project serves a vital local need in providing shelter for homeless people, and also raising public awareness of the difficulties they face in London," said Simon Hughes MP

"It's great that so many dedicated volunteers and local churches are able to work together to provide respite care and long-term assistance for these people."

The Robes project provides a hot dinner, somewhere to sleep and wash, and a cooked breakfast for up to 15 guests every night between November and April.

"The sleepout at Southwark Cathedral was a great way to raise funds and show our concern for homeless people," said Rt Revd Christopher Chessun, Bishop of Southwark.

"Through the Robes Project, 19 churches and their volunteers will look after nearly a hundred rough sleepers in Lambeth and Southwark this winter.

"200 people sleeping rough for one night was a real act of solidarity with those people who have to sleep rough every night."

• If you are passing through London Bridge Station during the rush hour on Wednesday, listen out for carol-singers who will be raising money for the Robes Project.

• Homeless people helped by the Robes Project will be among the beneficiaries of the gifts collected as part of Better Bankside's Together at Christmas campaign.