The Swan at Shakespeare's Globe has introduced its own label stout, ale and lager in time for Christmas. 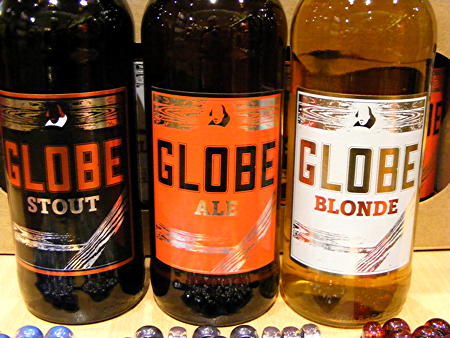 All three, which come in a souvenir pack, were launched at the Globe's shop on Thursday evening.

Among those present was the brewer Andrew Hepworth who is producing the Globe's exclusive drinks at his own brewery in Horsham. He was head brewer at the town's 200-year-old King & Barnes brewery until it closed in 2001.

Andrew was considered sufficiently 'local' to the Globe's caterers, The Swan at West Malling in Kent, to be invited to supply the Globe.

"We have the ability to do a range of beers," said Andrew.

"Hepworth & Co is organic certified and prides itself in sourcing from nearby.

"The lager is brewed from barley grown at Goodwood," added Andrew. He also pointed out that hops were first used for making beer when the original Globe theatre opened in Elizabeth I's reign.

Ale was reputedly used to help put out the fire which destroyed the original Globe playhouse on Bankside in 1613 when a spark from a cannon ignited the thatched roof during a performance of Henry VIII.

The new labels join Horsham favourites such as Pullman, recalling the soon-to-be-relaunched Brighton Belle, and Iron Horse. Seasonal Noel Christmas Ale is available just this month in Sussex to enjoy with Christmas pudding.

But Globe Stout, Globe Ale and Globe Blonde are only available at the Swan at the Globe bar and brasserie or in a pack of three (Ł10) at Shakespeare's Globe shop.