Canon Bruce Saunders to be sub-dean of Southwark Cathedral

Canon Bruce Saunders has been appointed as sub-dean of Southwark Cathedral. 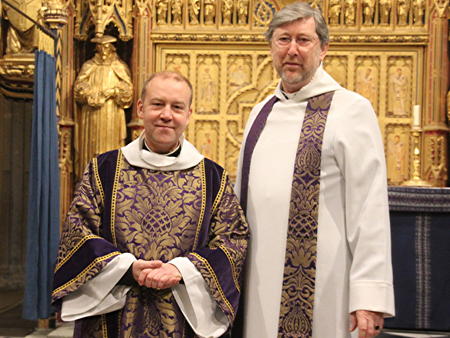 The Bishop of Southwark, the Rt Revd Christopher Chessun, has appointed Canon Bruce Saunders as the new sub-dean of Southwark Cathedral.

The news was greeted by applause from the cathedral congregation at Sunday morning's Choral Eucharist.

He replaces Canon Andrew Nunn whose appointment as Dean of Southwark was announced at the end of October.

Canon Saunders will remain as canon pastor of Southwark Cathedral and priest-in-charge of St Hugh's, Bermondsey.

St Hugh's congregation is currently worshipping at St George the Martyr while the church at the corner of Crosby Row and Porlock Street is rebuilt.

A new canon precentor will be appointed in the New Year.

Bruce Saunders, 64, has been on the staff of the cathedral since 1997, first as canon missioner and then, from 2003, as canon pastor.

He is married to Ros and they have three adult children and seven grandchildren. He is founder and director of the early music group New Renaissance Voices.

Canon Saunders serves as a governor of Cathedral School and is a member of Bankside Residents' Forum management committee.

He will take up his duties as sub-dean after Canon Andrew Nunn is installed as dean in the New Year.

"I'm thrilled and grateful to have been invited to take on the responsibilities of sub-dean while I continue my role as canon pastor," says Bruce Saunders.

"I greatly look forward to working with the new dean at this most exciting and important time in the life of the diocese and the cathedral.'

The Bishop of Southwark said: "Bruce Saunders will bring his wealth of experience of cathedral life and ministry to his new role and I am pleased that he has agreed to take on the extra work and responsibility of sub-dean.

"I am sure that the whole cathedral community will wish to join with me in wishing him well."